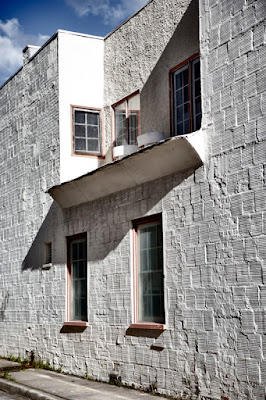 Yesterday I went to the ballpark and exercised doing push-ups, pull-ups, sit-ups, and bodyweight squats in between doing sets of stadium stairs.  It kicked my ass.  I was sweaty.  Walking back home, coming around the lake, a couple with dogs stood aside on the sidewalk waiting for me to pass.

"Sorry," said the man, "from the distance I thought you were my son.  You're not my son, are you?"  He stood smiling, his friend/wife/whatever stood beside him.  I grinned as well.  "He's a good looking fellow, too," he said.  I had said nothing, so I offered,

"Does he live here."

He did.  The fellow tried to explain some more, then said never mind, don't worry about it.  His friend/wife/whatever just stood by, grinning.  It was a strange encounter, and I wondered if I should take it as a sign or an omen.

I bought two bunches of flowers and a card and took them to my mother's house.  I asked her if she wanted to go to brunch, and she said no.  She was not feeling well, she said, and she would see me for dinner.  So I met Ili and my buddy for brunch at the good Italian restaurant.  It was warm and muggy, so we opted for sitting at the bar that looks through an open window upon the sidewalk and street.  We could stare at the passersby.

"This is the first time I've eaten out since we got sick," my buddy said.  We have both been in the grips of godfather death since the Friday before when we ate either the bad sushi or the bad meatballs.  Never, ever eat a meatball my mother says.  You don't have any idea what is in it.  She is right.  I will never eat one again.

I used to like the weirdness of eating lunch at the restaurant in the big Ikea store.  It was so cheap and darn tasty.  I liked the whole scene, the cafeteria style serving, the options.  I always got the Swedish meatballs.  I think the entire meal was a couple bucks.  One day, I read an article about the horrible things that were in the Ikea meatballs.  I was shocked.  Ikea seemed so much like it was for the people.

Eating out is never a good idea, I'm sure.  But we did fine with eggs and potatoes and orange juice, and then we took the Christmas stroll.  The Boulevard was moderately attended, and we walked and opined and ended up back at Restoration Hardware where I bought the little gold handblown (does that make sense) ornaments that I didn't get the day before.  And after that it was off to the grocers to get the ingredients for the stew I was making for the Sunday night meal.

At home, we poured some eggnog and put on some jazz and put the little ornamental balls upon the tree, standing back to look and rearranging them again and again.  And then I began to prepare the stew.  In went two pounds of stew beef and seasoning including half a bottle of red wine and some Old Crow bourbon for a hoot.  Then I started chopping a head of cabbage, some big red potatoes, yellow and white onions, and carrots.  First, the cabbage and the potatoes, then in a bit, the carrots and onions.  The pot was on a slow, roiling simmer.  Green beans and corn and some lima beans.

"You know," I said, "this is sort of what eating out was like from the middle ages through the modern era.  Inns and pubs would keep a big pot on the fire and everything from the kitchen that wasn't used was thrown in.  It was a perpetual stew forever in the making.  Fat and wilted vegetables and hunks of tough meat--anything, really.  Mine was the upscale version of that, of course, everything fresh and beautiful, but I was sure it still was much the same.  With one exception, of course--I had salt!

Mother came and we gave her small presents.  We tried one out in my house.  I had bought it at an spa/lotions store, an herbal mist with essential oils for fabric.  I guess it is like a healthy Fabreeze.  So I misted some on the couch and everyone agreed that it was lovely.

Dinner was a smashing success, the stew having cooked for two and a half hours, the mix of flavors starting to meld, though we all knew it would be better tomorrow, and that was O.K. as we had barely made a dent in the soup in the pot.  There would be plenty left for days.

This week will be busy with more parties and events to attend and the studio equipment to move.  And, of course, the factory whose whistle is ever-present.  To wit. . . .
Posted by cafe selavy at 8:52 AM