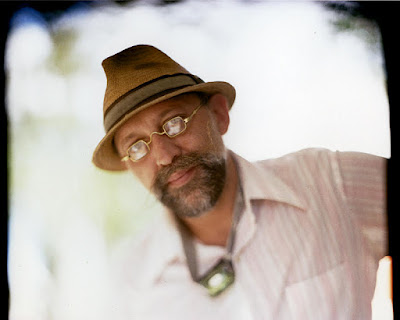 I saw a video about the camera I had made for me back in 2011 this morning, the Aero-Liberator.  Mine was the 13th one that was built.  I don't think I've used it since, but perhaps that is how I will get back into photography once again.  You can't take many photos with it at a time unless you have a lot of film holders loaded.  I don't have that many film holders, so I could take maybe twelve to fourteen pictures at a sitting.  Then I would have to develop them one or two at a time as it is 4x5 film and I would be working out of a dark bag.  It sounds intriguing, though.

The fellow in the photograph re-makes cameras, too, right here in town.  He saves my cameras all the time.

Enough of that, though.  I am making myself look cheap.  I am up early in the dark.  Today I return to the factory.  Factory Life.  I couldn't sleep last night for the first time in weeks.  Woke up every hour.  Anxiety, I guess.  I have loved the lazy life, eating, watching movies, sleeping in.  I am ready for a whole lot of that.  Rather. . . .

Those boys at New 55 better send me some film soon.  I'm ready to rock the world.
Posted by cafe selavy at 8:04 AM