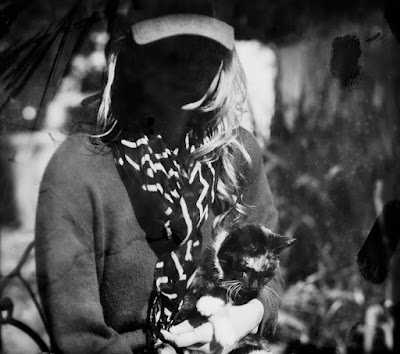 I made the first image developed in the R5 monobathwith the Black Cat Liberator.  It works--kinda.  You can't see it easily on this image, but there are big scars in the emulsion from handling the film.  I don't know if it happened when I put the film in the holder inside the changing bag or when I took it out or if it happened in the developing tank.  The R5 developer is fairly convenient.  You pop the film into a tupperware container in the black bag and six minutes later you wash the film.  I've been online trying to figure out a better way to develop 4x5 film.  There doesn't seem to be a good way.  You either do it in a tray or a tank.  The tray development is best done one sheet at a time.  I've not read many good reviews of tank development except with one that costs around $600.  I may try the $150 dollar version, but it, too, seems like a pain in the ass and only holds six sheets.  In most reviews of tank development I've read, there is some streaking or uneven development.  Tray development is just slow.  But I like the way the image looks in the main.  The monobath both develops and fixes the image.  A 4x5 negative retains detail but is kind of creamy, too.  That really appeals to me, of course, being a longtime Polaroid user.  With the Black Cat, I can shoot 4x5 without a tripod.  I have another camera, a converted folding Polaroid instant camera that I had made in Australia long ago that will shoot 4x5 film as well, though the lens is not as cool.  But it is much lighter and smaller than the Black Cat, and I will give it a try.  The plan is to go out into the streets, so to speak, and make portraits in very public places.  The weirder the camera, of course, the better.  All it takes (for a man) is a big set of balls.  Pictures of me as a baby confirm that I was born with a much bigger pair than most people.  At least larger than 50% of the population which is significant.  Big Balls in Cowtown has been a theme of mine for a long time now, hereto known as BBC.  I have to wear the BBC shorts (made by Patagonia) which are not dissimilar to the Dirk Diggler shorts that are made for extreme coverage as well.  But the problem with shooting 4x5 film (with or without big balls) is that you don't get many pictures at a time.  But if my balls don't shrink, and they do often enough being tethered to a very elastic line, I think I can make some spectacular things--if I learn to do the development without scratching the film.

Wouldn't that be something.

I am going to shoot a roll of 2 1/4"x 2 1/4" film today and develop it in the same monobath to see how that turns out.  It is only 12 pictures, so I should not have trouble finishing the roll.

I am really enjoying the 4x5 and square formats better than the 35mm format of the smaller cameras right now.  35mm is good for some things where you are trying to tell a story with environment, but often when shooting in the street, there is too much that is extraneous.  It is a way of seeing, I guess, and I got used to controlling things in the studio.  But I have another camera, the Hasselblad Xpan, that shoots cinematic images that are very cool.  The trouble is that it is a film camera and trying to scan it is troubling and nobody has the equipment to scan it for you.

I don't know why I am bothering with all this film stuff anyway.  There is nothing wrong with digital images.  They can be very, very beautiful.  What's the point?  I don't know, but I am thinking about setting up for doing wet plate work as well which is torturously difficult.  But first I want to get this film stuff down.  So even though I don't have anything to say, I may have pictures to post.  Maybe.  And if not. . . well, we shall see.
Posted by cafe selavy at 8:54 AM