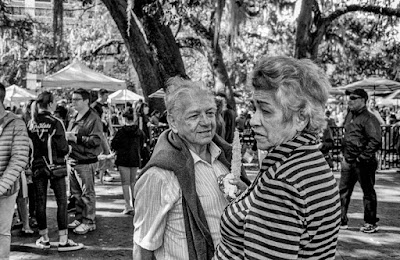 Ten percent of college students think that Judge Judy is a Supreme Court Justice.  I've been watching "Circus" on Showtime, a series about the 2016 election.  They've been in Iowa this week following the candidates who speak to small crowds in coffee shops, religious bookstores, and I don't know what all.  The camera shows the attendees as the candidates speak.  Jesus Christ, I am fearful.  These are the people who are going to choose our country's leaders.  I really hope that aliens from outer space come to earth in giant spaceships and take over the planet.  I watch and wonder how we are lucky enough to have the science we do.  It is not a circus, really.  It is a country fair.

After watching "Jessica Jones," I've asked everyone which superpower they would choose if they could have only one.  One fellow, a Ph.D. candidate writing his dissertation right now, said he would choose mind reading.  Really?  Well, he said, if he could turn it on and off.  I can't imagine it.  It would be a punishment, not a power.  Ili said she would choose time travel.  What would be the point, though?  It would be the same people in different costumes.  No thanks, I'd rather fly.

Or be invisible, but again, it would have to be one you could turn on and off.  I wouldn't want to be like the Invisible Man who had to put on clothes to be seen.  But perhaps we should all be invisible.

Just thinking, though. . . imagine being invisible AND being able to read minds AND being stuck in the building with those Cowboy Terrorists in Oregon.  Holy shit!  That WOULD be like time travel back to a time before logic was invented.

Or to be able to read the mind of Donald Trump!  That would be something.  He isn't going to the debate.  I think he is right.  They are awful.

Jesus, though, thinking about it, Judge Judy or Justice Scalia--what a world.
Posted by cafe selavy at 8:45 AM