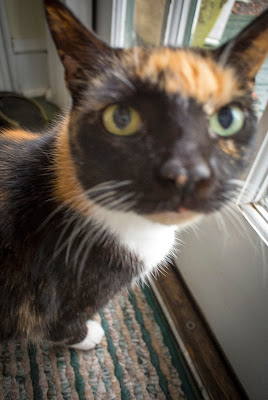 This is how we all feel today.  January 1st is for making resolutions, and so we have.  It is not to do what we did on January 1st again.  It was fun, but even the cat is out of focus today.  Though we slept early on the Eve, champagne madness and scotch finishers made a fun, fun day. . . and a horribly restless sleep.

Why do I always forget to drink water?  Because there are other things I like better.  And so after a five mile walk under a bright sky on New Year's Day, we had mimosas as we cooked black eyed peas, collard greens, and cornbread.  It is said to make for a lucky year I was told, but what I am sure of is that it made for a great lunch.  The collards were prepared in a broth I had made when I pressure cooked the chicken the night before, full of wine and garlic and onions and celery and plenty of good spices.  Ili prepared the bacon in the bottom of a deep pot and then it was all dumped together to stink up the house as I made the peas in the pressure cooker with the same delicious broth.  My buddy came over to eat with us as did my mother.  More champagne until it was all gone.  There was a bunch of it.  And after awhile, when my mother went home, we went to our favorite Italian place to sit at the bar and drink scotch and watch Stanford have its way.  We drank until we were hungry again and ordered one of their very good pizzas.   Nobody was about in the restaurants nor on the streets.  It was eerie, really, a deserted Friday night, but it seemed perfect.

At home, it was time for a nightcap.

"I have a headache."  It was one o'clock.  It was two-thirty.  It was four o'clock.  Etc.  Each time, I got up for water.  Perhaps that saved me something.

"Do you remember your resolution?"

This morning, the heat has broken.  The day is overcast and cool.  I don't say I won't drink this month as I once declared, a No Drink January, but I do plan to limit my intake.  Maybe yoga would help.

I'm sure to hear from my mother today that she will never drink again, and I will tell her neither will I.  I will at least quit when she is around.  I'm a good boy that way.

I have loaded up an old toy Diana camera with some outdated color film.  I took three pictures with it yesterday.  It is a start, anyway.  It is always easy to begin.
Posted by cafe selavy at 9:12 AM