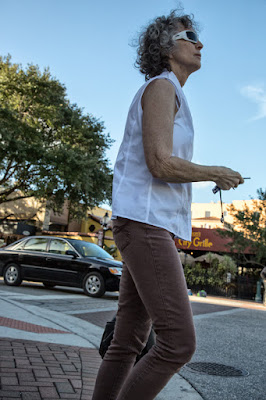 Reveling in the mundane.  Yesterday was a sick day, a cold, I guess, that Ili and I shared.  After a long walk, we both felt achy, so there was a long day on the couch watching two and a half movies and the second halves of two football games.  In between was a trip to the grocery and liquor stores.  Feed a cold, they say, and since we hadn't fevers, we did.  By evenings end, we were ready for a long night's sleep.

We were awoken by a severe storm, high winds and lightening popping all about.  Poor puss-puss was outside for the night (her choice, not mine).  But I had taken an Aleve P.M. which is very effective at knocking me out as it not only makes me sleepy but relieves my many terrible aches and pains as well.

It is terrible to spend your day being sick when it is beautiful outside as in the picture above.  But what can one do?  The movies were o.k. and the football games were fun.  Seeing so much naked Scarlett Johansson in "Under the Skin" was surprising.  I guess after her cell phone was hacked and the naked selfies were online, she figured what the hell.  But the film was a visual pleasure, a series of postcards, really, just a movie of beautiful moving photographs by someone who understands lighting.  The film seemed like a David Lynch film though it was directed by Jonathan Glazer.  It made no sense, but it was one of those films where you don't really care.  It is a film made for fifteen year old gamers in a sense, but really, it was pretty.  Made me want to go to Scotland which is saying something because I've heard little from people who have gone there that has ever made me want to go.

We also watched "Force Majeure."  You can skip it.

The mundane, indeed.  Defined by the Urban Dictionary as "A person who possesses no metaphysical talents or qualities. Alternately, a person who is perceived to lack a certain form of enlightenment."

Today, however, if I feel well enough (and I think I will), I am going to make some photo experiments with the Black Cat Liberator.  Nothing earth shattering.  And it will be slow and go, so don't expect to see anything here quickly.  Or ever.  If I had guts and was ready, I'd be making portraits at the Martin Luther King celebration in my own hometown.

As Jake Barnes says, isn't it pretty to think so.
Posted by cafe selavy at 9:27 AM