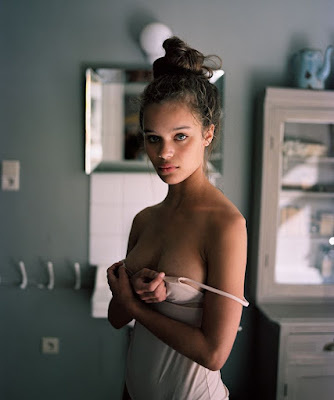 Ehsan Aminul not happy with the clutter in the background. the light shade popping up from behind her head looks ugly. sorry for my harsh comments.
Like · Reply · 7 · 18 hrs

Ryan Muirhead Photography Was never trying to make anyone happy. Feel however you want. smile emoticon

I saw this on Facebook and thought, "Yes!"  However, upon reflection, the response is a linguistic trick.  The photographer is using the word "happy" in a way not intended by the critic.  The statement would work better as a statement of fact rather than as an opinion.

That's what always happens for me.  I want to tell people to fuck off, but there is always some grain of truth in every criticism.  Still, I wish I could be as bold as this photographer.

It is not really much of a picture, though, in the big scheme of things, but I'm sure the model is flattered.

I'm working on making a documentary at the moment.  I have put together a crackerjack team.  I have contacted the raceway where I want to shoot, and now I must send them a prospectus.  In writing it, I have to think of the big questions I want to answer in the documentary.  What is it to be about?  It is the questions you answer that make the meaning of the thing, that decides if it can be any good or not.  It is like that with everything--almost.  I watched a five minute film last night that one of the fellows shot in NYC for his film program.  I read his prospectus before I watched the film and said to him what I have just said above.  But after watching the film, I realized I was wrong, for his was a visual piece on dancers and was lyrical rather than narrative.  You just watched it for the images, not to answer any questions.

Mine will not be a lyrical documentary though it will have elements of the lyric in it.  But it needs to be informed by an overarching theme with many smaller themes that relate.  It is always exciting and scary to begin a project.  But if I don't woo the people at the raceway with my prospectus, there will not be a documentary at all.

I will begin writing it today.  Wish me luck.
Posted by cafe selavy at 9:07 AM