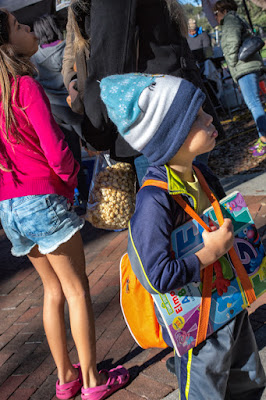 I stayed home from the factory yesterday and didn't talk to anyone.  I didn't leave the house until late in the afternoon.  I took some film in to be developed and then went to the gym.  I spoke a little bit there, of course.  I saw my beautician with her sister.  They looked a bit like circus performers as they are both training to be in some fitness contest.  They are short Russian Jews and stand like gymnasts, and with their high-waisted leotards and tight tank tops, they looked like they would be part of the high wire or trapeze teams.

I came home and showered and again felt out of sorts.  After a bit, Ili came over with a cake. 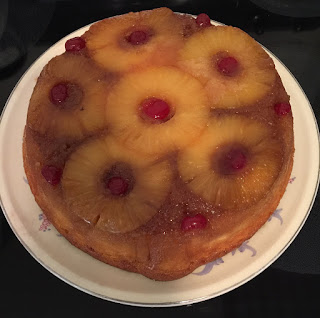 I had mentioned that I hadn't had a pineapple upside-down cake in twenty years or so, and that it was truly one of my favorites.  And so. . . .

We were going out to dinner in a bit as one of my buddies wanted to give me a treat.  I asked if we should have a cocktail before we left, and Ili suggested we have a Campari, so I mixed them up with sweet vermouth and Perrier and frozen cherries (I didn't have any ice).  Campari is a pleasant drink and the mixture looked like Valentine's Day.  We both said that we had never had interest in Valentine's Day and so we agreed it would be the lowest of low-key days.  I said I hated to celebrate when told.  I just have too much anxiety over it, so not needing to do anything was fine with me.

It was a coldish evening, so we all decided to sit by the big pizza oven on the backside of the main room of the restaurant.  It was my favorite Italian place which I chose over a steak house.  Wine and salad and good food.

And then home for some scotch and cake.  A perfect combo.

That is when the birthday wishes began to come in.  A couple texts.  My mother, whom I had not heard from all day, called.  Q left a birthday message.  We turned on CNN to see who won the N.H. primary.  Bernie had his day.  Now. . . well, I don't know where he will win outside the Northeast, and surely he can't carry any southern states, but I am not watching very closely.  I get a kick out of Bernie, though.  I do.

And soon enough, my buddy left and the day was over.  Maybe I'll feel better today.  I do not like birthdays and now they are just a reminder.