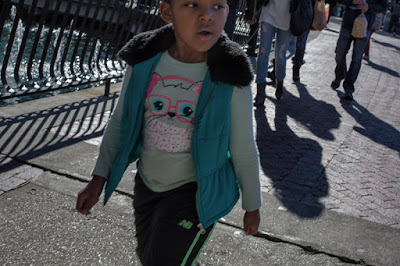 A little splash of color.  I will cary two cameras--the Hasselblad and a digital DSLR--each with an equivalent lens.  That way, I will have the same vision but for the 1:1 and the 3:2 ratios.  I will only look like a slight camera nerd.  I don't mind the digital color, but film should be black and white.

I say that knowing full well that the next roll of film I put in the Hasselblad will be color.  Just to see.

I had a few delightful things yesterday.  I had gotten a notification that the post office had tried to deliver a certified letter.  I was not at home, and I rarely check my mail.  The postman tried to deliver it on January 27th.  It was from the new landlord who bought the building the studio was in.  Uh-oh, I thought.  This might be bad.  But I went to the post office and got the letter, heart in throat.

Later on, I went to renew my license plate.  It took about two minutes.  I barely sat down when my number was called.  I didn't even have to show the proof of insurance card that I couldn't find.

Then it all went south.  I went to the gym after work, but when I started to get dressed, I had no shorts.  I looked around desperately wondering if one of the men who had finished working out  would let me have his.  Bad idea, I thought, and so, irritated, I packed up and went to the grocery store.

When I got home, the cable and internet was out.  I called thinking I hadn't paid my bill.  Two hours and fifteen minutes later--I was on the phone with them that long--it was all back on.  My life, I felt, was dripping away minute by minute.

Later on that evening, after dinner, I had a quarrel.

I woke today feeling--kerflumpt.  Sometimes you are just off.  Perhaps a long walk would help put me back together.  Walking works wonders.  Sometimes that is all there is, just walking toward a distant object, walking away from another.  There is some calculus involved, but I can't remember any of it.  I'll leave it for the geniuses to figure out.  I don't want to think too much today.
Posted by cafe selavy at 9:05 AM