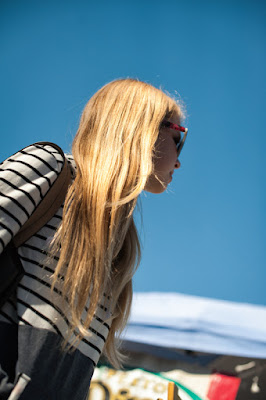 Yesterday was another perfect day, clear, cloudless, the air a whisper on your skin.  Etc.  Better, it was not "weird" at all.  Morning exercise on an outside course, a sidewalk brunch, a stroll on the Boulevard, a brief nap, some shopping for necessities, and dinner with mother.

I just wrote a whole thing on black people and the Oscars.  I had to delete it.  I came off as an angry white man.  I am not.  I am a silly white man who is incredibly irreverent sometimes.  But I don't want to be misunderstood.

But really. . . I've never seen so many black people at the Oscars before.

Chris Rock said one thing that I liked.  Rather, he asked a question.  Why are there separate categories for male and female acting?  Yup.

Let me stick to the oddity of the day, though.  February 29th.  Leap Day.  I can't believe that nobody can figure out a calendar that is the same every month.  Something is obviously wrong with our math.  It is not natural.  We need to move away from base ten math.  Am I the only one who realizes this?

O.K.  The day is passing me by.  The factory whistle blows.  I need to get to work so I can stand around the water cooler and figure out what I think.