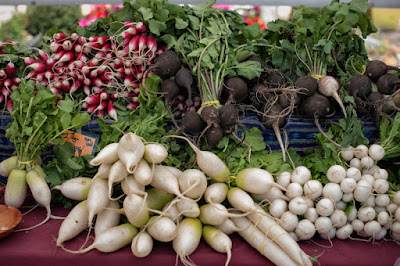 Man, this was a rough and strange week, but yesterday was really weird.  I never woke up.  I got up, but I never felt as if I had come to full consciousness.  The night before, we made a fire in the fire pit and sat outside in the crisp, cold air.  I poured some Campari and vermouth and soda and had a couple of those.  I had a beer.  I didn't eat, but I didn't even drink whiskey.  Somehow the Campari got me drunk.  How in the world. . . I never get drunk.  But I fell asleep early on the couch, and the next morning. . . well, I've already said that.  So I got up and drank coffee and sometime in the very late morning we walked to the Farmer's Market and bought pestos and cucumbers and a few other things. All I had to eat beforehand was some yogurt, and afterward we had a little pesto and a cucumber salad.  This is in and of itself weird for me.  We drank a little wine and decided to do some shopping in another town.

That was a mistake.  The interstate was jammed up with an accident and the closure of a lane.  So we learned from Waze.  We took the first exit and headed up an alternate route.  Not so good either.  Eventually, though, we made it to the first store called Home Goods.  I had never been to one.  I was supremely disappointed and would never go again.  It is a schlock shop of hideousness.  There may be things that I might want, but it looks like an ill-run hock shop of a store.

Next, another long drive, then. . . World Market.  This is when we began to get bitchy.  We didn't last long there, either, and so it was to lunch for a sandwich and a beer at a table overlooking another Farmer's Market.  The food and beer, perhaps, worked to our advantage, so we headed for the bar with the tabletop shuffleboard. . . and those wonderful little 12% IPA beers.  I lost and we went out back to sit on the patio in the sun.

A girl in the bar approached me and asked if my name was Steve.  It wasn't but she had identified me correctly in other ways.  She was a little girl last time I saw her, a friend of my friend's kids.  She remembered the band.

Later, when we returned home just before dark, we found the door to the house was open.  WTF!  Inside, everything was just as we had left it.  I  must have left it open when I was putting camera gear into Ili's car.

Another drink, then dinner with my mother and cousins at Outback.  I hate that place, but it was the least bad of all the choices we had.  Ili got to meet the hillbillies.  Dinner took three hours from start to finish.

Outside, we saw someone who we needn't have seen.  We ran away.  O.K.  I'm being secretive here.  I am just reporting.  It was more of a saunter than a run, really, but we kept our heads turned as if we had never seen the person we had obviously seen and who had surely seen us.  We talked about this for a long while wondering at the childishness of our actions.

But finally it was home and down for the night.  Gin and tonics and a very little t.v.

This morning feels on kilter again.  We shall see.  I am looking forward to watching the Academy Awards Red Carpet show.  That is all.  I might watch the opening, but I surely won't be watching the boring, boring awards.  I'll be in bed by the time they hand out the award for Best Hairstyle in an Action Adventure.

And then. . . well, the weekend will be done.  Come and gone.  Nothing more than an artifact.  A series of stills in a camera.
Posted by cafe selavy at 9:44 AM