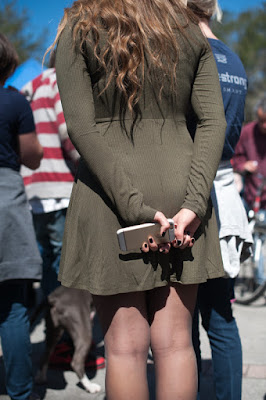 I wish I had never paid any attention to this election.  What was funny is now dire.  The "Free Chris Christie" movement provides some relief, but there is a debate tonight that can have no victors.  I've become sick with it all.  To wit: what will happen to health care and health care coverage.

I have reached the age where it matters to me.  I have had some health concerns lately.  I just got the results back from one of my procedures yesterday, and the thing was benign.  Yay, me. . . but it will need watching.  There comes a point when you are never really out of the woods.  I want to go back to that time when I took my body for granted, when I didn't wonder how much water I had drunk that day or how many grams of fiber I'd consumed.  Now my body is like a car that you are trying to get 400,000 miles from.

But it is old and has a LOT of miles on it.  And you know it can't go on forever.

So, I worry about things I never worried about before, and none of the republican candidates holds out a candle of hope to me.  Why is it that old people are more likely to vote for candidates who will cut all the benefits they contracted for when they were young?  I don't understand that at all.

And then there is Hillary.  She is surely going to be in prison before the election.  Uncle Bernie has his own problems (link).  I'm not saying he's wrong, mind you, but my friends are backing away from this kind of thing.  I don't know.  I think they are being too normal.  It reminds me of the time when I was telling everyone I liked to wear women's underwear.  Everybody cheered me, thought it was great.  I was a liberated man.  One day, though, I told them they were my mother's, and everyone's eyes went to the door.  They looked like crabs getting out of there.  "What?  What?" I asked.  "What went wrong?"

That is the way it is with liberals, though.  You can always go too far.

Those republicans, though, don't have a liberal bone in their collective body.  You can never go too far for them.  They will take away social security and your health care and oppose assisted suicide at the same time.  They really like it when people have to suffer.  It is the only thing that they really enjoy.  That's what makes this country great.

I don't know.  I guess it will have to be Bernie Sanders for me.  I'm hoping we'll get assisted orgasms in his health care plan.
Posted by cafe selavy at 8:51 AM