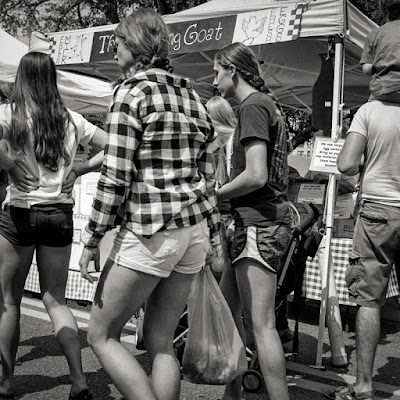 Yesterday's promises remain unkept.  It rained.  This morning, I woke to a dull, wet sky.  I had hoped to get out with my cameras early, but they would be ruined.  And so it goes.

I could have done little yesterday, anyway.  I woke in a haze.  Early we walked to the Chotchkie Festival under the threat of rain.  For me, it was a struggle.  The crowd was thinner than usual, but it was large enough to be confusing.  I walked into booths to look at the offerings, but each time, the ground began to sway.  I tried to use my camera, but that is not possible when you are with someone.  You must do one thing or the other, and I chose the other.  We heard a nice quintet made up of two cellos, a bass, a violin, and a flute.  We decided to stop for breakfast where we could sit and look out over the Boulevard and watch the crowds drifted slowly by, but the restaurant menu was a festival menu, and I could not get what I wanted.  So we left.

And just as we got back home, the rain began.

We made a breakfast of our own and went back to sleep listening to the drizzle.  And we woke listening to the rain.  We watched t.v., then slept some more, waking near sunset, hungry.  Ili made some fresh chicken salad and we ate and had the day's first cocktail.  Neither of us wanted to move off the couch and the weather was not good, so we decided we would stay in for the evening.  I would pass on seeing my favorite trio, pass on hearing their Django tunes.  We got more comfortable, lying in front of the big t.v. screen in the dark. Something was still not right in me for my body still vibrated with sleepy fatigue.  Lazy, holy stillness.

Morning coffee.  The news.  Catching up on the scores of the tournament games I missed.  Waiting for the rain to break.

I sit before five sunflowers in a vase.  They are cheery in the dusky light.  Still my body buzzes with fatigue.  Surely I must have something.  I will go back to bed.  There are few promises that can't be broken.  Sometimes there are too many.
Posted by cafe selavy at 9:20 AM