Slouching Closer to The Thing Itself 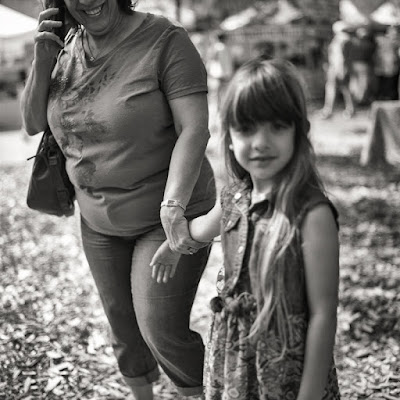 If I write in the second person point of view, this won't be a narcissistic endeavor, right?  O.K.

So you wake up miserable.  The weather has changed from hot and humid to cold and dry in a matter of hours.  Your body aches in new and mysterious ways.  Your stomach virus doesn't seem to have completely disappeared, your bladder is full, and you may have a swollen prostate.  You don't want to say that, though.  Mostly, however, you are miserable because you keep spending money on cameras to replace what you had, but you are spending more money than you did the first time and not getting as good a product.  Before you went to bed, you won an auction for a Leica M 35mm Summicron lens to go with the Leica M7 that you have ordered.  "WTF!?!?!?" you think.  And in the night, you realize that even now you will be missing the Leica strap, lens hood, and flash that you had before.  You don't want to think about how much more this is going to set you back.  No, you do not want to think of this at all.  People on eBay are cheaters, you think, chipping away at everything.  You will have to spend more money to get everything you need.  Need?

So you get up and start the day in pain both physical and mental.  You put on the coffee and mix your vitamins in a water glass that has dried in the dish drying rack, but it tastes funny.  Then you remember that you used it for something when you were developing film the day before.  In your paranoia you wonder--"What?  What did I use if for?"  Then you remember.  You put warm water in it as a presoak for your film.  The only thing that might have tainted it was the metal thermometer that you may have used in the chemical bath just before.  That would be bad.  But maybe you had rinsed the thermometer beforehand.  Maybe.

Your gut begins to cramp and growl.

The day before, you had gone out with your cameras in the morning to a Farmer's Market in the Big City.  You like to go there because you feel much more anonymous than you do in your little Hometown.  And you have decided to commit to the film cameras.  You are in love with them now and only want to shoot with them.  They are a mystery, and you feel the way you did long ago before there was a digital world.  You hold the little Leica R5 in your hand and feel liberated.  The Hasselblad is slung over your shoulder in a small bag.  You are out and ready to go.

At the Farmer's Market, you are nervous, of course, as you always are when you are trying to take pictures of strangers.  But when people see the Hasselblad, they smile.  You don't even need to speak to them.  Rather, you do a little pantomime pointing first to the camera and then to them.  You give them a shy smile, and they smile back and nod their heads.  "Jesus," you think.  "Jesus."

There is a mother holding the hand of a little girl who smiles and nods.  You look through the viewfinder and know that this is it, this is going to look like what you've been intending the pictures with this camera to look like all along.  It seems it is finally coming together, and when you snap the shutter, you know it--Boom!--that is it.

A few minutes later, though, you realize something.  You didn't meter the shot.  You look at the camera settings and realize that you have severely overexposed the picture.  You are sick with it.  You walk around paying more attention now.  More pictures.  Good pictures.  You love this camera.

Your friend has left you because it is hot and because you are involved with the pictures, and in a little while you go to the cafe where she has gone to have a mimosa.  You set your cameras on the bar and order one, too, and the manager of the place comes over to talk cameras with you.  You say that the Hassie is magic and your friend says it is crazy how people let you take photos of them with that camera.

At home, you begin to miss the studio you have given up.  You remember, at least, why you got it in the first place.  You want to develop some film which means you must prepare everything beforehand.  You recently bought a changing tent that is big.  Really big.  It is the size of the dining room table and stands three feet high.  You must clear everything off the table so you can put the tent there.  Then there are chemicals to mix and film tanks to find and scissors and can openers, etc.  You use a monobath developer that only takes six minutes to develop the film, but it must be heated and then there is the rinsing.  And after all this, you hang the film in the bathroom to dry and worry about dust.  It takes another half hour to put everything away, and you are suddenly frustrated and mad because you don't have a studio where you can work.

Later in the evening, you cut the film and put the big Hasselblad negatives in the scanner.  It takes a long time to scan nine frames.  You won't see them 'til the morning.

In the morning, excited, you bring the hard drive to the computer and open up the files.  And you are pleased with the look of the negatives.  The monobath gives them a look you like, rather like old instant film, but more detailed.  And then you bring up the one you thought best, the one of the little girl being held by the arm.  The exposure, it turns out, was not too bad.  The negative has scanned fine.  And then. . . all curse words combined.  You've missed focus. . . again.  You bought the Hasselblad for a bargain price, but you got the shittiest focusing screen in the world.  It has to be that, you think.  It can't be the camera.  You will have to buy another focussing screen, but they cost a lot of money.  There are no bargains that won't cost you money, you think, and you hate that you are buying expensive bargains and swear from now on you will pay more money to get the things you want.

The girl is out of focus, but I am getting closer to the look I am going for.  The out of focus area is good, and if I had gotten the focus right. . . .

Still, I am in love with the Hassie and in love with the film.  It is another degree of separation.  Digital is fun and good, but there is something else I love about film.  It will get better.  It does.
Posted by cafe selavy at 9:47 AM