Cheaper Than A Therapist 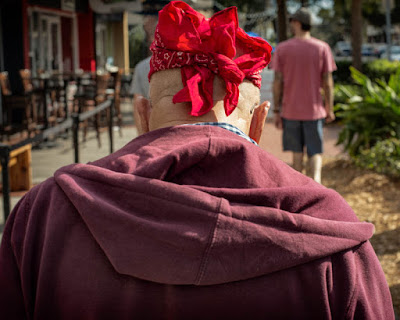 I've been asked by several readers if I am going to post again.  I haven't been certain.  What do I have to say, really?  I've been criticized for writing about myself by someone close to me.  But it isn't me, I say, just some fictionalized version.  I've made up plenty of stuff over the years.  But writing is always about the self unless you are a hack who makes up stories you've never experienced.  Even the wildest of science fiction writing is based on something relatable in our own experiences or else no one would read it but some of our institutionalized friends.  But truthfully, I've been thrashing around trying to regain my voice and vision.

To wit, two days ago I found an old hard drive with my old journals and photos from 1999 through about 2006.  That was all long before I had a blog.  The blog, by the way, was not my idea but C.C.'s who said, "Just write.  An audience will find you."  And they did for a long time.  And then I destroyed it and started again, but by then, blogs were not a thing, at least not the kind I had started long ago.  Blogs had become corporate or they were nothing at all.  Facebook, Twitter, Instagram. . . . But the old journals and photos inspired me.  I began reading the earliest entries when I was finding my voice, and boy. . . there is a lot of material there.  The photos, too, were much freer and inventive as I experimented with different processes without fear of reprisal.  I mean. . . this was back when I was making mix CDs with my own cover art for people I liked.  Yes, I know. . . .  I also had a mullet in the 80s, so there is little excuse for me.

One thing I have considered is that I am not sure I can provide seven photographs a week.  I've been working with my Hasselblad.  The camera is fine.  The photographer sucks.  It is a difficult camera for me to use.  I am trying, but it is going to take some time for me to find "the magic."  I make a lot of mistakes that I will eventually quit making, and when it all becomes more natural for me, then the pictures will get better.

Yesterday, I went to a very special photo gallery and looked at the exhibit of what the curator told me was "some of our favorite photographers that we represent."  And when I was finished looking, I thought, "My stuff is at least as good as this."  This was the same gallery that didn't want my photos a year and a half ago.  But they didn't see the prints, just some jpegs, and I thought that I would take in some big framed prints just to see what they would say.  I am confident that I have prints that they will like if they have any sense at all.

And then I drove home down a road I never travel (as they say).  It was a miracle of a road with tiny wooden houses that were converted into mystical yoga and magic stores.  As I drove ever so slowly by, I saw some black kids (I know, you can't say that) doing some mural graffiti stuff on the back of one of the buildings.  There were a bunch of them, and it looked like a party.  I spied a girl with a camera taking pictures, and I stopped the car and watched awhile.  I wanted to go up and photograph them, but I was timid.  I sat and chastised myself for minutes.  "Temerity is not going to get you pictures," I thought, so I backed the car up and pulled into the lot.  I pulled out my Hasselblad and my Nikon and walked up to them.

"I saw you were taking photographs, and I wondered if I could, too," I said to the girl with the camera.

"For me it is, but no, it was made in the 1960s.  I just got it, though, and am still trying to learn to use it.  Here," I said, handing her the camera so she could look through it.  That is a selling point, looking through the viewfinder of that camera.  I showed her how it worked and told her to take a picture with it.  She did.  Then it was my turn.  And so I lined up three fellows who were sweet about it and took a few frames.  We chatted awhile and then I took some pictures of the girl.  That is when I realized I had gotten the exposures wrong on everything I had taken.  Shit, piss, fuck. . . . I made the adjustments and took a few more, but now without much confidence at all.  I am not sure what is on the film now.  Maybe something, maybe nothing.

And so. . . I learn.  It is slow and go, but I will get it all figured out soon.  I've been shooting in the studio for years where the lighting levels are all the same.  And I've been shooting with instant film and digital cameras so I knew right away if the exposures were correct.  With the Hasselblad, there are always at least four moves before I can take a photograph.  Slow and go.  But when I have it down, then I must find a project, and that will be the bigger challenge.  Maybe I can buy a family to photograph.  That would be ideal.