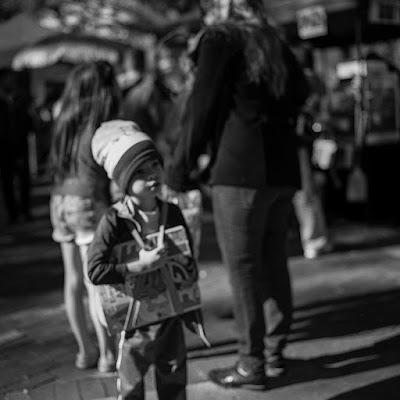 Here is an example of a near miss.  I like the feeling of the image, but I missed focus completely.  I like the unfocussed background, but the kid--well, he is out, too.  I am going to have to spend money to get a better focussing screen.  I thought I could go with the old one that is on the camera, but it is not possible.  Sometimes buying the cheapest thing costs you too much.  That is a lesson I've learned many times in life.

I wake up in the night panicked about my Leicas.  I look online all the time trying to find one that I can afford.  I can't.  An M7 plus a 35mm and a 50mm lens is too much.  Forget about getting a digital M.  I still have one old Leica R3 rangefinder, and I started shooting with it yesterday, but the mechanics seem to be off.  I will take it in to the repair shop today and see what is wrong.  I like the camera--maybe even love it--but it is not an M.

I may buy another lens for the Hasselblad today.  They are much cheaper than the Leica lenses.  I think that I might be a little crazy.

I have been sick in the gut, both high and low, and throughout my body.  I, of course, think immediately that it is cancer.  Also, from running three times this week, my knee blew up.  I thought it was finally O.K. but it is not.  Last night it was swollen inside and sore all the time.  Other than that, I am just out of sorts.  I thought to fix it all with a deep, drug-induced sleep, so I ate a light meal, then took two Aleve P.M. tablets.  That's right--drug induced sleep for lightweight nerds.  I needed pain relief, though, if I were to sleep well, and Aleve P.M. is the best sleep medicine I have ever taken.  Still, I woke at four, so wishing for more sleep, I took half a Xanax.  Now I was partying.

This morning, everything feels better.  My knee, my gut. . . .  I thought about the gut thing, and I realized I had eaten some two week old pesto that I got at a farmer's market.  I'm thinking that was the source of my problem.

Everything in the fridge gets thrown out today.  I'm starting over fresh.

I'm not going to talk about politics here.  I have been sick of them for many months.  But it is obvious to me that I don't fit in anywhere at all.  There are two sides made up of many different and opposing factions.  The breakdown will make for many Ph.D. dissertations.  This is a rich year for doctoral candidates for sure, so there are some who will benefit from the circus.  Hillary is relying on the "minority vote."  She plays that card over and over and over again until there is nothing else left but old white NPR men.  You know what I mean.  Sanders has the youth vote and the old white guy who grew up in the age of socialism vote.  Cruz has the lunatic religion vote.  And Trump?  He has everyone who hates "weirdness."  They are anti-gay, anti-socialism, anti-minority. . . the vanilla vote.

None of these candidates is going to steal votes from the others.  We are radicalized, and we are at war.

I dislike them all.  They are epithet hurling ideologues with no fluidity, no plasticity, no ability to hear a dissonant joke.  It is not about politics.  It is about being human.  You know, flawed, changeable, wrong a lot, right sometimes, reverent, irreverent, soft and strong, desirous and jealous, anti-social while loving the tribe all along.  Etc.

Or as Emerson said, having the ability to hold two opposing  ideas at once without going mad.

Obviously, that is an onerous task.  The world has gone mad.

Worse, the most desirable places are being destroyed.  It becomes dangerous to say anything.  We are being boxed and muted.  We will either destroy one another or become zombies.