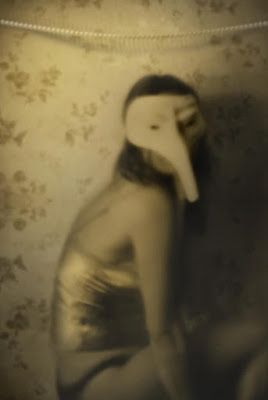 I need to be taking more pictures rather than to be drinking more liquor.  I went to a birthday celebration with some friends from the factory last night.  At a bar.  Again.  This weekend, I will try to reverse the trend.  But it is much easier to drink than to make a picture.  And in the end, perhaps, it is much less dangerous, too.  There are a trillion reasons not to make anything revelatory, whether in imagery or words or anything that can be construed as a representation of some internal state.  I am badgered and maligned often for what I do here.  I am belittled as a hobbyist and a narcissist.  I reply, "No, that is not me.  You are speaking of Q," but it does no good.  I am likened to people who incessantly post pictures of their butts on Twitter.  "I am not like that," I say.  "She has thousands of followers."  But again, it is to no avail.  All things become conflated, all things similar if not the same.  All bad things.  This must be what if feels like to run for president.  No matter how many people like you, there are as many who hate your guts.  Even David Bowie had his detractors.  Imagine that.

Again. . . those Victorians.  But I tried.  I've tried here to hide behind masks and veils, but too much is taken as "the truth."  My writing has never done me any good.  Many times in my life, girlfriends have read my private journals when I was away and mistook the rotgut on the page as an accurate depiction of my internal state.  If it were only that simple.

I like this photo by Marta Orlowska.  She makes beautiful pictures.  I guess it says as much about the viewer as it does the artist, this sharing of tastes, the producer and the consumer.  We are as much defined by what we like as what we don't like.  It is a never-ending battle.  What is most telling about me, however, is that I am jealous of her photographs.  I am that way.  And that, my peeps, is a tell-all.

But perhaps it is only natural.  Surely many must have that.
Posted by cafe selavy at 9:16 AM