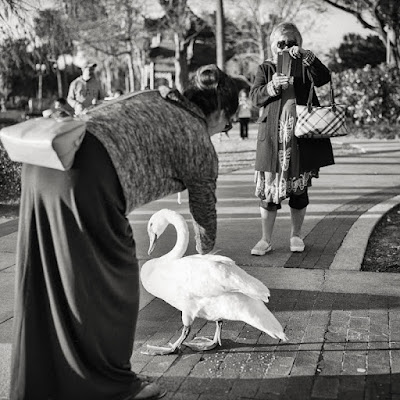 "You mean the swan?"

"Sure you can.  What makes you think you can't pet a swan?  Jesus, why are you being so difficult.  Just go over there and pet the goddamned goose!  Swan, I mean."


I've been purging as part of my spring cleaning.  I took all the pictures off the refrigerator except for a few of my mother and some friends.  Last night, I went through photos from the studio and got rid of about half of the ones that I held in my hand.  Time is the great revelator, of course.  Many of the images just weren't good.  Now they are gone.  In time, I may whittle all of it down to a handful.  Perspective, I guess.

Q wrote to me last night that he was buying an expensive camera.  It is not expensive by many standards, but he still feels guilty about it.  And he should.  Why the hell are we spending money on cameras?  I have spent thousands in the last few weeks and haven't taken a serious picture yet.  I went out last night to give it another whirl.  I never got out of the car.  It is stupid.  I could make a series called "My Life After Work Without A Studio."  I could add, "Without a Theme."  I could make up a theme.  I'm clever that way.  I could expound on the existential vacuum of living by rote, of the mundanity in which we clothe ourselves so as not to rock the boat, so as not to fail.

I guess I am bugged by people like Jim Harrison who just took the chance, who bought the ticket and took the ride.  On any given day, he could get into the car and take a road trip just to see what he would see.  He gave himself over to his urges.  He wrote about the experience.  Every day.  He could have justified buying a camera.

I would like to get into the car today and drive.  And I will, but it will be a short journey, not the one I am fantasizing about.  My journey will be thirty-two miles round trip.  It will take approximately eight hours.  I'll spend most of that in a fluorescent cube.  I'll sit at a desk and unconsciously wiggle my leg.  I will flex my pecs and scratch my head and pop my neck.  Once in a while I will get up to stretch my legs.  My back will hurt and it will take thirty seconds or so before I am able to stand fully erect.  I will walk by other ghosts in other cubes who look surprised when I hang on their doorjambs.  They will probably be looking at their Facebook page or will be on Tinder or some dating site, or they will be watching a funny YouTube video rather than working and the surprised look will be more paranoia than true surprise.  I will say something and they will say something and it will take take thirty seconds or so before we are actually in the flow of a conversation.  I will watch the clock in the afternoon and whenever I think I can get away with it, I will slip out of the building and into the parking lot.  When I get home, I will remember little of the day except for the tasks I must do tomorrow.  The new camera equipment will remain in the bag untouched.

The woman comes over to look at the picture her friend had just taken.  They look at one another and laugh.

"It's cute.  What do you want to do now?  You want to get a cup of coffee or something?  There's a little place right over there." 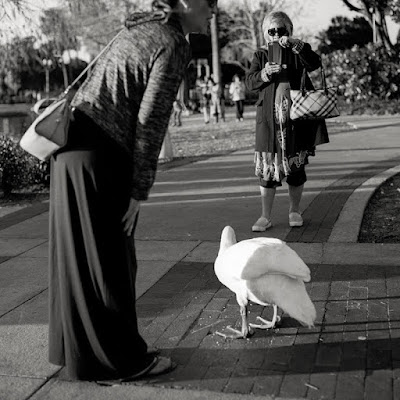