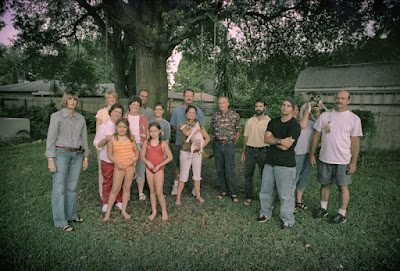 I found an old roll of film in one of my drawers.  I had no idea what it was.  It was an old Kodak Max color film, the cheapest they made, with 24 exposures.  I wondered if I had bought this at a drugstore years ago, shot it in one of my cheap cameras, and then just forgot about it.  I wondered about all the things that might be on the film when I took it in to be developed.  I wanted to cover myself.

Jesus.  I just didn't want to get arrested.

When I got the film back, there were only about ten pictures exposed.  It was some sort of family outing.  I don't know whose family it is.  How did I come into possession of this roll?  I loved this picture, of course.  I wish I could find more rolls of undeveloped film.  If you have any, send them to me.  I'm up for surprises.  I love the look of this scanned film.  It is so much different than digital.  It has a "quality."  Filmic, I guess.

The house was pressure washed yesterday by my house repairman.  It looks as I thought.  It looks like I am going to have to paint.  There is no end to the work, the expense, the suffering.  There is no getting even.  This is not a zero sum game.  I am always in the hole.  The game is rigged so that the house always wins.

Trump is right, of course.  The political process is rigged, too.  And if Bernie Sanders doesn't win the nomination, a republican will be in the White House.  Hillary doesn't have a chance.  It is a fascinating circus car, but we are watching it drive all of us over the cliff.

But damn--I love the weirdness of this picture.
Posted by cafe selavy at 8:19 AM