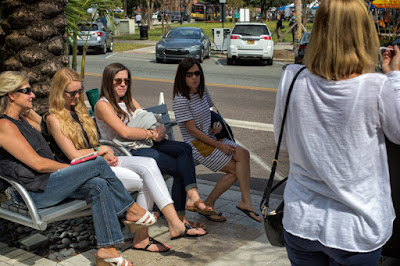 I had a lot of time yesterday, so I did a Google search for "street photography 1960's."  And of course, many of the photos on the screen came from the camera of Gary Winogrand.  I looked at photos, and began reading this essay on his book called "Women Are Beautiful."  After work, I picked up some color film I had processed at the local photo lab (more on this another time), and then Ili and I went for a drink in the late afternoon and sat on the deck of a restaurant overlooking the city via its signature lake.  The sun was sharp, and the big sidewalk that surrounds the lake was full of people out for the day's last light.  We had decided to get out of our routine.  We need to break free of our Winter Lives and enjoy spring's long, beautiful hours as they ever so slowly wend their way toward darkness.  Or something like that.  It was a beer in a place we don't normally go.

I had taken my Leica and, as I do when Ili is with me, I asked people if I could photograph them rather than taking pictures on the fly.  And as always, I was surprised that everybody said yes.

We will see these pictures later.

But I am not sure I like them as much as I like the ones I take without asking.  There is a completely different look and feel to them, more documentary, more random and in the moment.  You can never be sure of what you are getting, and you are always surprised when you get to see them at home.  There are elements you just couldn't have planned.

Hence Winogrand.  He was the master of all that.  He was obsessed.  He couldn't stop it.  It seems that was all he ever did.  I read yesterday that his first wife said that being married to him was like being married to a lens.  Dig that.

So I had been looking at his photographs all day and was sick with envy for I want to have spent a lifetime making such photographs, and that, sadly, is no longer possible.

When we got home, after dinner, after everything, I chose the YouTube app on my Apple TV and watched some Winogrand documentaries.

What an asshole.  No, not really an asshole.  He just had little patience.  None at all, really.  The best documentary was a recording of a "lecture" he did at M.I.T. in the 1970s.  The producers had simply put his photograph over the recording.  There was no lecture, though.  Winogrand just opened the floor and answered questions.  Or didn't.  And the longer it went on, the more irritated he became.  The audience would laugh and boo or hiss then laugh again.  It reminded me of a Charles Bukowski reading.

"I'll come out there and kick ALL your asses," he would say to jeers and heckles.  Winogrand was about like that.  You could tell he hated it as much as he didn't.  You know--fame and money are hard partners.

In the seventies, attitudes were becoming what they are today.  Winogrand, however, was obviously from the fifties and early sixties in many ways.  He talked about his impulse toward photographing women.  That was problematic with a smart college crowd reared on liberal ideologies, and you can feel the rub.

Oh. . . this is getting to be too long for this morning's entry, though.  I am not able to speak to this at length with any sort of intelligence in the time I have left to write.  So. . . go back and click on the link and read what Carl Chiarenza has to say about it.  I'll try to get back to this tomorrow.  Besides. . . I have to confess that I haven't read the entire essay, so I need another day anyway.

I chose to post the picture I did because it seemed related, not because it is a great picture, and certainly not because I think it is a Winogrand equivalent.  It is simply what I had at hand that might have been influenced by looking at his pictures.

I will do more of that today.  You should, too.  It is fun and informative if not educational.  You'll see.  Trust me.
Posted by cafe selavy at 8:09 AM