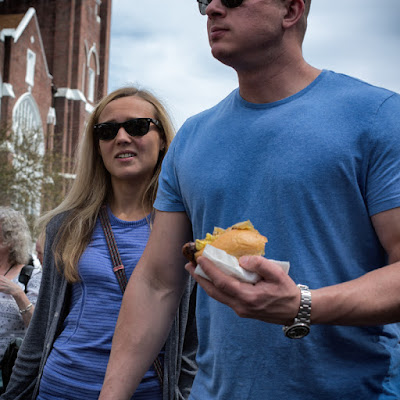 Another perfect day in paradise.  Taco Tuesday, I thought.  It would be fun.  I'd meet Ili at a Mexican restaurant in the chi-chi part of my own hometown and we would drink Margaritas and eat chips and tacos and get fat for an afternoon.  We went early to avoid the crowd.

I had my suspicions about the place, though, even with its premiere location.  They have terrible, meretricious signs advertising the place, plastic canvas with the gaudy colors of a t-shirt shop on a tourist strip.

We were so early, we were the first customers at a sidewalk table.  We sat awhile, though, before a waiter wandered by.  It was a Mexican place, but he was Puerto Rican, I am sure, with a top knot and close cut sides, and tattoos running the length of both arms.  He informed us that this was REAL Mexican food made with FRESH ingredients.  I knew I was right then.

The premium Margaritas sucked.  So did the service.  So did the shredded chicken tacos.  Ili took one bite and left hers on the plate.  It might have been my description of the Mexi-belly we were certain to experience later on.  I did it in my best Jose Imanez voice, describing the condition as traditionally Mexican.

We left and walked to the Boulevard to sit and watch the afternoon fade.  We were bored.

At home, we sat on the rotting deck and had a cocktail.  This was beautiful.  Everything was fine.

You must make your world, of course, but you have to live in the other one, too.  I enjoy it less and less, though, except when I am there as an observer, an anthropologist with a camera and a pen, or if I am taking part in the holiness of nature.  You need a lot of money otherwise if you are going to be in beautiful, satisfying, spacious places.  The Breakers.  Four Seasons.  Etc.  And even then you might have to share the place with wealthy drug dealers and Justin Bieber.

I am waiting on the house repairman to show up.  He is going to pressure wash the house and the apartment today.  When I come home, everything should look much better than it does now, but I know I will have to decide to paint.  I don't want to, but painting is one of the less skilled things that can be done.  I can do it.  I just don't want to.  The difference in price though--oh!  I could buy a few cameras or a Vespa.  That might be good motivation.  The best, really.  That or a a couple summer vacations.  That might be the honey in the vinegar.

I read the essay on Gary Winogrand's "Women Are Beautiful" yesterday.  I liked the first three words--looking and watching.  I thought of the difference between the two and the more I thought about that, the weirder it became.  What should a photographer do?  Look or watch?  I guess the critic is giving equal weight to each.  "Lurking" might be in there, too.

"I thought so.  You're disgusting."

"There's no such thing.  You need to get out of here or I'm going to call the cops."

The essay is an apology for that in some ways.  Maybe many ways.  But I can't help myself.  I love looking at Winogrand's pictures.  Besides, I think the critic takes a wrong tack.  The pictures are interesting because they are wrong, because Winogrand is doing what the rest of us wouldn't do.  We need people to picture the taboo.  That is what art is, representing the thing the rest of us don't know how to talk about and are afraid to perform.  Artists are jesters.  They are given permission to insult the king.  That is their job.  That is what they are supposed to do.  They need no defending.  They are able to tell us disturbing things that we might not want to hear but need to.  It is not the artist who needs defending; it is the critic.  Critics are always wrong eventually as new theories replace the old.  It is only the art that remains.  Theory is fun.  Art is something else.
Posted by cafe selavy at 8:59 AM