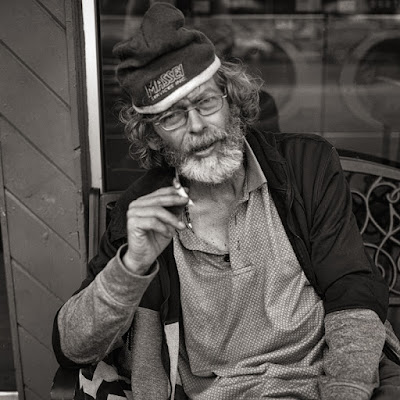 This is one of the very first images I shot with my new 150mm Hasselblad (Zeiss) portrait lens.  Either there is something wrong with the lens or I missed focus.  Everything is in focus except his eyes.  I don't think there are any diopters for the camera, so I may need to wear my glasses.  I suspect, though, that there is something wrong with the lens.

I stayed home from work yesterday.  I began the day with quail eggs on toast.  They tasted like eggs, but with a strongly flavored yolk.  Breakfast done, Ili went with me to the lumber yard to pick out the boards for the deck.  That was funny.  When I asked the fellow if I should go pick out the boards I wanted, he looked at me like I was speaking Polish.  It didn't seem to be an option.  It was a big lumber yard with lots of rough looking fellows, so I didn't feel like repeating myself.  But the price. . . oh. . . it was very, very good, so if a couple of the boards are not to my liking, there is little complaint.

I reserve the right to change my mind, of course.

After that, I went to working in the yard.  I have plants that are not doing as well as I would like, so I gave them all a bunch of water with my new hose.  It is a dandy, one of those scrunchy ones that pack into a pouch.  I had my doubts about it, but now I am a believer.  They are much better for home use than the old thick plastic and rubber ones.  I gave every bush a very good soaking, and by day's end, everything looked to be thriving.

Then I began sawing boards in two.  The buddy who helped me rip up the deck didn't cut the wood into small enough pieces.  Some of them were more than four feet long.  I went down the street to where they are building a new house to ask the contractors who were leaning on the pickup bed studying the construction plans if I could pay them to send a couple guys down at the end of the day to pick up the wood and put it in their dumpster.  Again, I might as well have been speaking Polish.  Why do these guys not like me?  They dismissed me with a wave and said no, they were too busy, etc.  I felt the blood rush into my neck and head and knew that I was getting mad, more at myself, really, for I had put myself in the position of having them say no.  I hate to ask anyone for anything (I've never asked a girl out on a date in my life) because I can't stand rejection.  I was about to say that they were not very neighborly and tell them they were in violation of several city statutes before I threw in the word "assholes," but I turned away instead and walked back to the house.

It was me, not them.

I stayed home from work in order to get things done, so I pulled out the reciprocal saw my buddy had left for me to chop the remaining pieces of deck that I had left as a walkway into the house.  I really needed a circular saw for cutting the boards in half, but I didn't have one.  I'm not that sort of guy, I guess.  I used the reciprocal saw to cut the boards.  It was slow work, but it did the job.  Board after board, I made a growing pile of two to three foot boards.  I had put some in the garbage can as people had advised, but it made a very little dent in the pile.  It was trash day, and in a while, I saw the garbage truck coming down the street.  They passed my house on this stop, so I kept cutting wood, but by the time I had cut as much as my slender artist's hand could stand, they still had not come back by.  Across the street was a lawn company's truck and trailer.  I decided to walk over and see if they were willing to haul my wood away.

"I still have seven yards to do," the head fellow said, "but if I have room at the end of the day, I'll come back and get it."

He was an alright guy.  I asked him if he thought the garbagemen would take it if I gave them something, and he said they might.  I'd asked several people about this, and opinions were split.  I told the fellow that I would give it a try, but if the wood was still there later, I would pay him to take it.

In a bit, the garbage guys were back.  I had put some money in an envelope and asked them if they could take the pile of wood.  We are now good friends.  They will be back on Thursday for the second pile.  I like making friends.  It is better than the other.

It was mid-afternoon then, and I decided to go to the gym.  It was a beautiful day, and I wanted to come home and do the weeding that was part of why I stayed at home.  By five, all of that was done, and I felt good but for the terrible pain in my back.  A shower would help, and then a big cowboy drink.  Campari and vermouth and soda with a slice of lime.  That's what all the cowboys drink, I've heard.  It is good for their tummies.

At nine o'clock, I took two Aleve P.M.s and headed for the bedroom.  Ili had put an Icy Hot patch on my back earlier.  I put on some music and read for a few minutes, but soon I was out for the night.

This morning, minutes after I got up, the big lumber truck pulled up to deliver my wood.  Jesus, I was still woozy from the Aleve and was wobbling all over the place.  I moved my car so the driver could back in, but first I had to help him move some things--some iron chairs, a grill--and he checked to see if he would be able to clear the power lines when he raised the flat bed up to dump the wood.  After about half an hour of manipulations, we had it.  He was some sort of Spanish speaker with a heavy accent.  He liked my bromeliads, so I gave him a bagful as his tip.  That seemed to make him very happy.

Now I must return to factory life.  It is not what I want to do.  Trouble waits for me there.  But tomorrow, I will take the morning off to help lay out the deck.  I am no help, really, but I need to be here in case some city official comes by.  I have not pulled a permit since this is a "repair," and I do no want to leave a paid worker alone.  But I have an important presentation at work tomorrow, so I will need to be gone in the afternoon.  All of this makes me nervous, and I will be until it is all done.  Maybe this weekend I will be able to relax.  One day I would like to go out and think about photography again.  Until then. . . .
Posted by cafe selavy at 9:08 AM