Blue Moon with Mercury In Retrograde 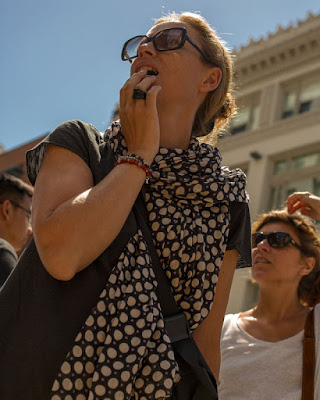 Things must go well before they can to turn to shit.  The day started right, working in the yard, making life pretty, getting things done.  When it got too hot to work in the sun, I moved into the garage to get that organized and ready for moving the printer.  Then, after much work, I went to the gym.  Afterwards home and a shower.  Then it was five-thirty and I had yet to eat a thing, so I went to my favorite Italian restaurant and got a good seat at the little bar.  The day had turned beautiful.  The first beer was sweet.

Next to the bar, a room had been made ready for a celebration.  A jazz quartet began to play.  They were good, man, really good.  People began to show up.  A birthday cake.  I realized I knew some of the people going in.

It was part of a family I used to date.  One member of it, really, but they come together more or less, fabulous wealth their protectorate.  It was the paternal aunt and her clan.  My chicken cacciatore came and a glass of wine.  The window behind the bar opened out onto the street where handsome people were walking by.  A pretty woman in a little black dress and complimentary necklace sat down next to me, a chair between us.  She looked as though she was part of the party, I thought, but she ordered a drink and began to text.  She kept smiling at her phone, and I could swear I knew her from somewhere.  On the sidewalk, I saw my ex-girlfriend and her parents coming toward the restaurant in single file, her father in the lead, her mother behind her.  I thought they looked less than happy. I smiled and prepared to say hello, but only the ex gave me a short, "How are you?" as she passed by.  No smile.  We dated a very long time ago, and maybe seeing me had given her a start.  They passed into the other room.  I looked out at the street.  The pretty girl in the LBD stood up and greeted a couple with a baby, then paid her bill.  They made their way to a sidewalk table.  So she was not with the crowd I used to be in, I thought, and wondered where I might have seen her before.

I had finished my meal and had pushed my plate away.  I sat and sipped at the rest of my wine, thinking.  It seemed as if my dinner had reached its natural denouement when I looked up at the t.v. screen and saw the horses being led onto the track at the Preakness.  A group of people stood behind me and something was digging into my back.  I turned and saw it was an elderly lady's purse.  O.K. I thought.  She is not trying to pick a fight.  I heard a man say that it was her 90th birthday, so I turned to give her good wishes.

"No," she said, "it is not my birthday, it is hers."  She nodded to the woman beside her.  "It is my wedding anniversary."

"Fifty-fourth," she said with a nod of the head and a grin.

"Oh, I thought you were going to say your second."

She gave a look of surprised then punched me lightly in the arm and laughed.  I turned to the other woman.

"Thank you," you she said with a smile.

Getting up, I said that I would give them the bar.  Nodding to the birthday girl, I said, "I could feel her trying to lift my wallet, so I am going to go."

That got a smile and a laugh.

So many celebrations, I thought as I walked down the pleasant sidewalk toward my car.

At home I turned on the television just as the last horse was led into the gate.  A very muddy track, but man, those horses flew.  It was a hell of a race with the favorite taking the lead but being held off the rail and made to run wide.  You could see that he was going to flag.  You just knew it.  Then, coming from third, Exaggerator blew by them all, strong and confident.  It was over.  There would be no Triple Crown winner this year.

Later on I got a text.  It was a Blue Moon, it said, a bad omen.  Shit, I thought.  I didn't need any more bad omens.  I had enough bad ju-ju right now.  I was in for the night hoping against hope that things would get better soon.  I used to celebrate such things.  Now I was only praying to escape it.


Blue moon you saw me standing alone
Without a dream in my heart
Without a love of my own
Posted by cafe selavy at 9:26 AM