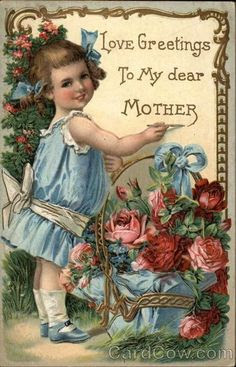 This is a picture of me when I was young.  I used it for my Mother's Day card.  Fixed it up in Photoshop so it was apropos.  It was my mother's idea to dress me up like a little girl until I started kindergarten.  It was the custom back then though I have to admit it was a fading custom and most of the other boys weren't subjected to it as much as I.

So anyway, to all you mother's, Happy Day.

Some of you have speculated correctly that I have considered abandoning this blog.  It is difficult for me now.  There are things I don't write because of Ili.  I haven't been taking pictures since the studio closed, so I haven't anything to post each day, or if I do, only things of the worst quality.  And, more importantly, I am dull.  I have been for a couple of months.  Not that I am dull to many people for the number of people who care to come to this site has dropped exponentially.  When that began, I pretended that I was writing for myself, but even I began to get bored.  Nobody wants to read about the coming of age, about bad knees and horribly painful backs and hips and the onslaught of age spots and skin tags.  The physical qualities that I have always counted on being superior to others are fading. . . fading. . . fading. . . .

I neither like it nor find it interesting.  So.

I missed posting about the Kentucky Derby, but I watched it yesterday with Ili and two friends whom I've watched the Derby with for many, many years.  We all had money on the race.  None of us won a thing.  For the second year in a row, I've been talked out of betting on the favorite because "it doesn't pay anything."  Two to one sounds good to me, though, and I am pissed that I didn't put a hundred down on the winner as I had wanted.  I have bills to pay.  I need cash. 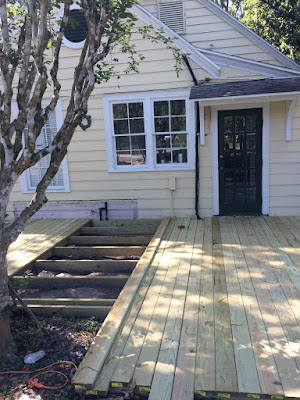 This is part of my expense and what I have been doing for the last horrible month.  My old deck was rotten, so it was time to make the place for my mother again.  First we tore up the old deck.  That took a day.  Then the handyman kept putting me off about when he was coming to do the framing.  Meanwhile, the old deck lay in the driveway with me wondering how to get it removed.  I called some companies, but they wanted hideous amounts of money.  And then, the lumber company delivered the new.  I hadn't pulled any permits to do this and I live in a very regulated town.  Down the street, two separate house constructions are underway, so I knew the city inspectors would be coming by every day.  I had lumber old and new strewed all about the premise.

I held my breath.

Finally, the handyman came.  I took the day off, and we began framing.  I don't think he liked me working with him, for I wanted to get it done.  I had watched videos on making decks, and they could do it usually in a ten to fifteen minute video.  Quick!

It takes a lot longer.

But I did learn how to do it and how to measure corner to corner to make it square, etc.  Handyman thought me a pain in the ass as I required us to do it this way.  While we were working, the garbage truck came by.  I ran out with a wad of money and made friends.  No shit. . . they took away all the wood from the old deck.  I had cut it into three foot pieces so that it was easy to handle.  Things were working out swell.

Until we started topping the deck. The wood that was brought out was shit.  It had bark all over the edges.

"Tell them to take it back," said Handyman.

Jump ahead.  I bought "master grade" pressure treated wood for 2.5x the price of the other boards.  The boards to go back sat beside the new ones in the drive.

And still I hadn't seen a citation.

For over a week and a half, I tried to get the lumberyard to pick up the wood.  They came once and took seven pieces.  Why?  No one knew.  Days of calling, pleading, then getting all butch on them.  And finally. . . it was gone.

I took off Friday and my buddy came over.  Without professional help, we were topping the deck.  Each sixteen foot board gets 18 screws.  We measure every two boards to make certain we're straight.  We bend boards into place.  And we've learned how to notch a board to go around a fixture.  I am using power tools and feeling cowboy.  We worked Friday, Saturday. . . and we are 2/3rds finished.  We have already done thousands of squats and waist bends.  My back and hips and knees are fucked. My fingers are arthritic.  I won't go on.

It is tough becoming a cowboy at my age.

My buddy placed our bets at the dog track.  He says I should go.  I have never been.  I asked him if I could take a camera in, and he thought  I could.  But I missed it.  He said I wouldn't have believed the crowd at the place yesterday.  Maybe the Preakness, though.

When he isn't here, I am weeding beds.  I have to scrape the house and paint it.  There is no end to the work, so I am not sure when I will be able to make a picture again.  Oh. . . I forgot to say. . . I haven't quit The Factory. Nope.  I have two jobs now. . . Pencil Neck all day, Cowboy for the rest of it.  The Artist has taken a Leave of Absence.

There is so much to do, I despair.  But I will prevail.  That is what we do.

That is the report.  No promises.  I'm just trying to do what I can.
Posted by cafe selavy at 9:00 AM