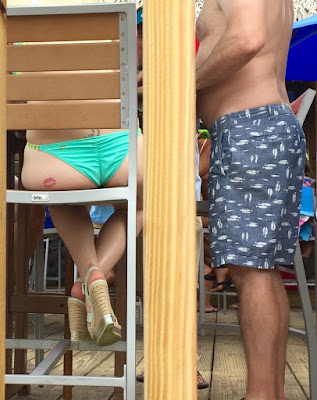 My second day of the five day weekend began like the first day ended.  Work.  Ili and I got up early before the heat of the day would beat us down and began weeding the newish jasmine bed.  As always, people stop to talk so that we only get to work half time.  But we dug out weeds down to their roots, thrilling when we found a "master root," one from which many, many weeds have sprouted.  This may sound mundane to you, but for the gardener, it is close to orgasmic when you feel the thing coming whole from the depths.  You can feel it in your nether regions.

After that, we planted twenty-four more jasmine plants, digging the holes, filling them with Milorganite, making a little muddy pool, cutting the roots apart, dropping them in and covering them with soil.  We were pleased.

After that, we decided to clear a big bed of day lilies that had grown wild.  What started as a garden many years ago was just an amorphous bunch of ratty plants.  I would slip the big shovel beneath the roots and Ili would pull them from the top.  We cleared a large bed lickety-split.  In the process, we found some things we wanted to find.  I'd been commenting on the lack of earthworms in the jasmine bed, but here the soil was more loamy and wormy.  Mmm.  Then, to my surprise, I found a four inch red snake.  I am pretty certain it is a rat snake.  Ili picked him up and moved him to a safer environment nearby where he wouldn't get chopped up by the shovel.  We are hoping to see him grow, but he is tiny now and there are two black snakes that live in the yard.  We are afraid he might get eaten.  Still, we have our fingers crossed.

My mother came over while we were digging the bed and sat on the new deck and watched while we worked.  We had worked four hours and were done by noon.

"Let's go to the beach," I said.  My mother declined, but Ili was in, so we showered and hit the road as quickly as we could.  Neither of us had eaten, so we decided to get some working-class fast food sandwiches on the way.  We were on the road.

But what a road.  The route we took was once a quick, straight shot to the closest beach to my own hometown.  Now, it is a nightmare of stoplights serving new housing projects and all the businesses for which they are built to make rich--Target, Subway, Wendy's, Dollar Store, etc.  Stop, go, stop, stop, stop, go.

I was worn by the time we got out of the car and walked down to the ocean.  Everything had changed since I'd last been to this beach, it seemed.  It was packed with. . . oh, hell, I can't go into it without sounding like something I don't want to sound like.  I only wish I had had the heart to bring my camera.  If only. . . .

Ili was happy, though, when we walked into a surf shop where she was able to buy some cool summer things--a Mexican blanket for the beach, a Moo-Moo, some stickers for her boogie board. . . .

I took her to a bar that used to be interesting in a certain way.  It was a redneck/biker/shrimper kind of place with a tiki bar and weekend bikini contests.  There used to be a lot of steroids and new titties.  Now. . . oh, hell, I can't go into it without sounding like something I don't want to sound like.

Ili, though, being the only one with a camera (phone), snapped today's picture.  It tells a tale.

We stopped at the liquor store for the drive home.  I bought some Barbencourt rum and limes and a couple coca colas and we took the toll roads back.  I couldn't do the other again and you don't end up spilling when you have to brake for stoplights.

At home, showered, we walked the property and gave water to the new sprouts.  We were more than a little proud of the work we had done in the morning.

We wake this morning, day three, ready for projects.  There is a shed to clean out and the study to fix up.  We are going to buy some gardening tools and new plants.  Jungle music is playing.

This is life outside the factory.
Posted by cafe selavy at 8:53 AM