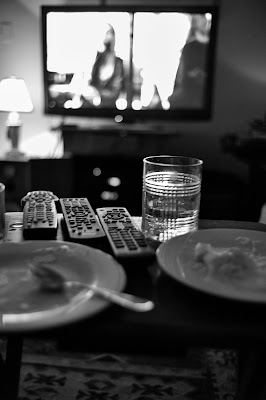 This may be what I remember about life in the end.  I've seen it enough.  Four remotes, dinner before the television, a glass of something.

I think I'll read this book based on the last paragraph of the N.Y. Times review:

“Sweetbitter” grows darker than you might expect, in terms of where Tess’s desires lead her. It’s a book about hunger of every variety, even the sort that can disturb you and make you sometimes ask yourself, as does Tess, “Was I a monster or was this what it felt like to be a person?” (link)

The idea that we all have to subscribe to the same ideology is what drives Trump's success.  It is not about what goes on "out there," but rather what is allowed to go on "in here."  He is a rotten sonofabitch, but who isn't, really?  I watched the beat classic "Pull My Daisy" last night, shot by Robert Frank, written by Allen Ginsburg and Jack Kerouac who narrated as well.  Those beats who moved us so. . . well, just watch it and see.  They parented a generation in more ways than one.  I think their children would be taken away by the state today.  There are so many sanctions, so many conditions, as we are "perfected."

“Was I a monster or was this what it felt like to be a person?”
Posted by cafe selavy at 9:09 AM