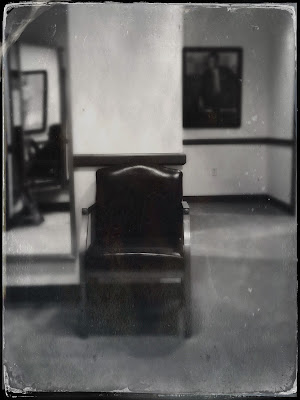 When I wrote yesterday's post, I didn't realize it was Friday 13.  I am not a superstitious guy. . . until I am.  To wit, I woke up yesterday feeling lousy in a vague, undefined way.  I knew the symptoms, but they didn't add up for me in any meaningful way.  I was just "sick."  I didn't feel well.  I couldn't see well, couldn't hear well, couldn't move well.

So we went shopping.

That's a picture of me waiting for Ili in the dressing room at Brooks Brothers.  40% off.  That's what I was.  That's what the coupon said.

She bought an outfit.  When we got home, they had given her the wrong size.

We tried to right ourselves with wine and lobster bisque.  We barely made it home for a nap.  A long one, a righteous one, one that could be restorative.  When we woke, it was late.  Quick shopping for dinner material.  My buddy stopped by for drinks on the deck he helped build.  Gin and tonics for fun.  Dinner.  The steak was not so good.  We were bushed and just wanted to get on the couch.  I rented "Deadpool."  It was no good.

This morning I read about deathbed conversions.  Everybody has them, apparently.  Sartre, it is reported, cried like a baby on his deathbed and called for a priest.  Christopher Hitchens, the review said, was leaning toward belief as he died of cancer.  I read this today after arguing against religion on the deck with my buddy last evening.  The Faith Gene, I said.  They found it in the Human Genome Project.  Maybe it should be called the Superstition Gene.

I had a conversion yesterday.  A Sick Bed Conversion.  For a while, I became quite superstitious.  It is recorded.

I hope I feel better today.  I don't know yet.  All I have done is read the news and drink coffee.  I bought some breakfast sweets last night, though, and that makes me feel better.  Little things.  I love breakfast breads.  Maybe I'll just lie around today and eat them and sleep.  Maybe I don't feel much better at all.
Posted by cafe selavy at 8:08 AM