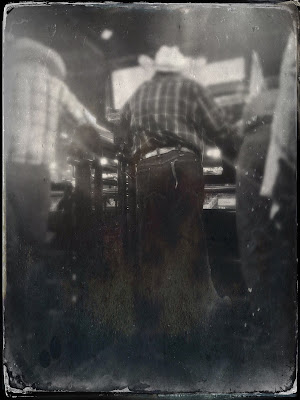 I'm trying to "cowboy up," but I'm just a whiny little bitch.  The painter told me that the last person to paint my house did nothing except spray some paint on.  "Your bedroom windows aren't even glazed," he said.  "That's a lot more work than I estimated when I started."  O.K. I said, that was not part of the deal.  I'll do the glazing.  I figured it would take me two full days.

I went to Home Depot and got some glazing that shoots from a tube like caulk.  I got a caulking gun and a five-in-one tool.

Yesterday morning, I went out to give it a try.  The tube glazing that I thought would be so easy wasn't, so the painter let me try some of the stuff that comes in a tub.  "Roll it in your hand into a long strand," he said, "then push in between the frame and the window like this.  Once you've got it in there, take this tool (the five-in-one I bought was not the correct tool) and flatten like this, then push it in and pull it down.  See?"

Oh, yea, I said.  The painter went back to what he was doing and told me to practice on a few panes.  I rolled the glaze between my palms just like he had shown me, then I pushed it into place between the window and the pane, then I took the tool and pushed in and pulled down.  The glazing rolled up and off the window as I pulled.  Shit.  Wash, rinse, spin, repeat.  I couldn't do it.

I've made a financial deal with the painter, and now he will do it.  I don't think he is very happy, though.

I don't want to do any more work this summer.  I've cowboy'ed out.  I'm ready for the Bohemian life again of reading and drinking and trying to be creative.  I like these working fellows fine.  I'm just not cut out to be one.  God had other plans for me. . . in his infinite wisdom.  I am more like the sweetheart of the rodeo.

Speaking of which. . . the Senate has approved a bill to draft women into the military (link).  There you go.  Let men be men and women be men and I'll be the sweetheart of the rodeo.  That's a Groucho Marx line, I think.  Look it up.

Today I have early factory meetings, so I must giddy up and go.  Time to be an obedient little buckaroo.  Somehow I've got to pay for all this shit.
Posted by cafe selavy at 7:48 AM