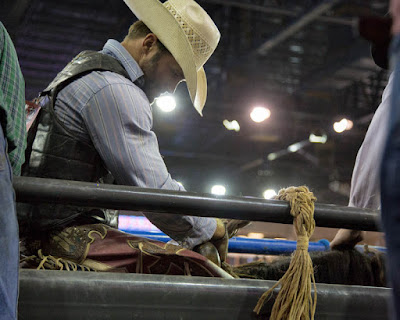 I looked at the footage we shot at the rodeo.  It is good.  Big relief there.  Now the long hours of editing.

I have other long hours, too.  The painter told me that the windows in the bedroom were not glazed, that whoever painted my house last time had just painted them.  The price he gave me for painting the house did not include glazing these windows which will take a couple of days.

Guess who will be glazing the windows.

I am tired and don't want to do anything.  But I will be out there this weekend with a putty knife and a bunch of glazing.  It will take me forever.

The fellows I shot the rodeo with looked at my b-roll footage yesterday.  They were stunned, they said.  The images looked like stills.

"That's what I do," I happily told them.  "I was making photographs that moved."

I just want to be a visual storyteller.  It is thrilling.  Give me some cameras and recorders and notebooks and let me go free.

I'm glad I've pushed the pause button on my Orlando shooting reactions.  Many of the things people first thought they knew are wrong.  People are going to be in a position of trying to justify their first reactions.  Arguments will get all twisted up.

I do have one reaction that I will share, though, because it is something I've always thought and said.  You can't disenfranchise people without getting a bad reaction.  Give people a stake in the culture, in the economics of it, and they will help preserve it out of self-interest if nothing else.  But keep people on the outside and don't give them a stake in things, and they are going to fuck you up and take your shit eventually.

That doesn't explain the shooting, though.  There will be plenty of others who will try doing that.
Posted by cafe selavy at 8:26 AM