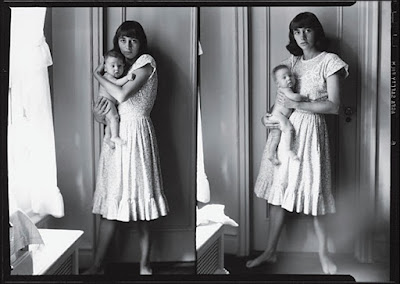 The Diane Arbus biography is revealing.  Either it is a very creative take or the Arbus I'd always thought about was a piece of fiction.  Some things overlap, but. . . well. . . I guess we are all weird when seen from the outside.  The biography certainly isn't flattering, and it will surely make a difference in the way people look at her photographs.  Arbus had one major talent, I think.  She was able to get people to let her take their photograph.  Someone said in a disparaging tone the other night that what Arbus photographed was inherently interesting--or something to that effect.

And thusly, I became sad.  I have not taken pictures for a very long time now, and I am afraid I will never be able to do it again.  I have lost all confidence.  I think about going out in the afternoon with a camera, and then I think to myself, "Really?  What do you think you will do?"

I am hoping this will pass.

I was asked to participate in a video project about photographers that work in an alternative process.  I am writing back to say that I have lost the studio and am not practicing any longer.  I am not a practicing photographer.

I am feeling my entire life has been a series of missed opportunities.

You have to be crazy to practice any art form.  You must be able to accept rejection and criticism and still go on.  You have to have some sort of maniacal faith in your abilities to overcome, even while experiencing the worst, most depressing doubts.  I'm thinking of all the suicides.  But up to that point. . . .

Or else you just have to be an asshole.  I wonder how much doubt Picasso suffered?  Caravaggio?

Arbus, if you trust the biography, lived in a fantasy world.  Her brother, the Poet Laureate Howard Nemerov, wrote this:

To D, Dead by Her Own Hand

My dear, I wonder if before the end
You ever thought about a children’s game—
I’m sure you must have played it too—in which
You ran along a narrow garden wall
Pretending it to be a mountain ledge
So steep a snowy darkness fell away
On either side to deeps invisible;
And when you felt your balance being lost
You jumped because you feared to fall, and thought
For only an instant: That was when I died.


That was a life ago. And now you’ve gone,
Who would no longer play the grown-ups’ game
Where, balanced on the ledge above the dark,
You go on running and you don’t look down,
Nor ever jump because you fear to fall.

Yup.  The fear of failing, the fear of falling.  It is the fear that locks you up.  But don't let them see it.  If you do, they've got you by the short hairs, or so says Al Swearengen.  There are plenty of people who will throw gas on that fire.
Posted by cafe selavy at 7:55 AM