Fighting 'Round the World 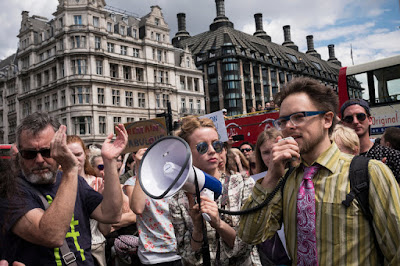 Here's the photograph illustrating the lead story in the New York Times today.  This one about how the Brexit vote has divided Britain.  If you can't look at this picture and tell what's wrong. . . I'll have to tell you, because the "experts" are overlooking the problem, too.  Here is what the "experts" attribute it to (link).

I am a little woozy this morning, so this will not be a straightforward argument.  It will be a rattle-and-roll piece that will end up where it will.  I may change my mind in the middle or near the end of writing it.  It doesn't matter.  I don't know a thing about Brexit.  I haven't bothered to keep up with the pundits.  I know what it means, but I have not been interested in those who endlessly bore on about what it will mean in the future.  We all know what it will mean.  No we don't.  And that's the point.

O.K.  Look at the picture.  Without reading the signs that are in the background, can you tell which side of the issue these protesters stand?  That's right.  You can.  And it is this picture, and pictures like them, that made the majority of Britain vote for Brexit.  Most of those who voted to leave the EU, I suspect, could tell you on which side of the issue the people in this picture stand.

But if you come out as a straight white male, a housewife, a hillbilly. . . .

You can't divide the world that way and expect everything to go o.k.

It works both ways.  Those fucking hillbillies have been in charge too long.  They've marginalized everything that wasn't them.  I know.  I was there.

It seems generational, but I think it is genetic.  I don't believe people have much choice about how they feel.  I'm a liberal.  I want everybody to be happy.  I want to treat people the way they want to be treated.  I want to respect difference.  I want everyone to get along.  I hate fighting.  I hate everything that determines our need for a military.  I hate weapons.  I am part of the peace and love generation.

That, however, doesn't change the way I feel about things, and things and people who make me feel as if I am on the other side of understanding or compassion. . . oh, I feel things.

Jesus, don't watch that video.  I don't know what I was thinking.  That is a piece of sarcastic propaganda.

It is easy to deal in stereotypes, though.  And it is easier to think we are right than to think that we might not be.  So hey, yea, hurray for our side.  I have a tribe, you have a tribe.  The other tribe sucks.  They are a small and stupid people.  They eat cockroaches and other people's babies.  Look at them.  They are ugly, too.  And they smell bad.