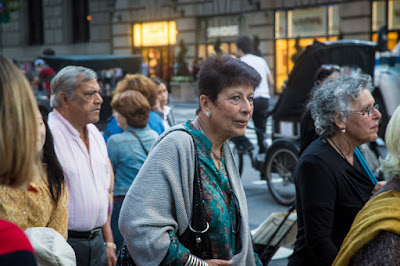 Photographing people is sleazy.  I've been thinking about it.  It is just wrong.  The only photographs of people should be selfies or ones of which the subject has control.  I get criticized when I photograph people no matter if they agree or if they don't.  It is just a form of exploitation.

There is that.  But our visual history of the world would be incomplete without photography.  So there is that, too.

I have a yearning to go to New York again, to make photographs of people in the street, in the world. I don't mind asking people if I can photograph them.  As a matter of fact, I enjoy it.  It was great fun having a studio where people came to be photographed, where they saw the work on the wall and oooed and ahhhed and wanted me to put them there, too.  And it was fun going to the beach that summer with my little plastic Holga and asking surfers if I could take their photograph.  I like that, too.  But those are different things completely.  The photographs I take in the streets of people in thought, isolated and alone among the throng, aware of the traffic and the crowd but somehow somewhere else, too--there I see a true human history.  I almost said that this is what the world looks like, but that is not quite true, for the frame makes its own reality, but it is as close to a true recording as I can get.  It tells us something that otherwise is lost. 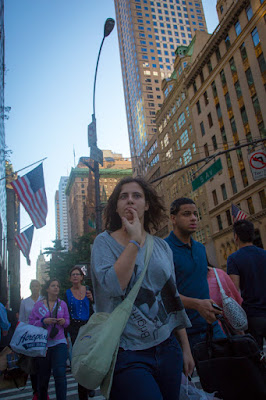 To wit: yesterday I began planning for a photographic trip to the city.  I bought a new backpack that will carry a bunch of cameras effortlessly and safely.  It cost me a lot of money which is sick considering how much I've been moaning about the money that I am spending on the house and the car.  But I decided that there is something else, too, and that is me and my mental health.  I am cracking up or breaking down, whichever direction you might have it.  Buying the bag and loading it up brought a bit of hope.  I am ready to go now at a moment's notice.  So to speak.  The bag was expensive, but I've looked at a bunch.  This one is well thought out, well designed and built (link).  It is not a frivolous purchase.  It is a tool that will make my life a bit easier.

That is what I tell myself, anyway.

And I do like these pictures.  I surely do.

Yesterday was jammed packed with activities and duties.  I went to the gym for the second time in a week, then came home to work in the yard.  That is a thing that never ends.  Neither thing does, I guess.  By noon, though, I was a worn out wreck, and so I gave up, took a shower, and made a meal.  I had a beauty appointment at two, and I wanted to go look at the photo bags before I went.  Time was short and there were two stores that carried them.  I knew I would need to go to both.  But after the first one, while driving to the second, I came across two men with signs and bullhorns standing in front of an abortion clinic.  I had my Rollei in the car, but I drove on as I am not in street shape right now.  All the time, however my mind was racing.  Nope, I thought, I needed to turn around and make a picture.  It took me a few more blocks to decide.  I pulled onto a side street and went back.

They looked at me for a minute and said, "O.K."

"Thanks.  I just got this old camera, so I am going to be pretty slow.  I'm still getting used to using it."  I pulled out my phone which I now use as my light meter and clumsily took a reading.  Then I put it back in my pocket and popped the viewfinder on the Rollei and began to focus.  The man held the sign up covering half his face.  I took one, then one of the other fellow, then one of the two of them.  I was hurrying and couldn't see and am sure the pictures will be useless.  I shot them a peace sign and said, "Thanks," and began walking back to my car.

"How do you feel about abortion," one of them asked me.

He said something about human life, and I said, "There are just too many people, bro, too many for the planet."

As I left, I felt I had changed his mind about things.

I felt bad about it, really, but I had been very considerate and had answered all his questions.  I wouldn't have said anything otherwise, but I didn't want to lie to him.  It wouldn't have been nice.

Going back and taking the pictures had cost me time, and I had to beat it in order to get to my beauty appointment.  I would have to go back to the other store later.  But, I thought, it was worth it.  I was glad I turned around, glad I went back, glad that I was there taking pictures in the street.  I had asked them and they said yes.  Maybe I should have told the man to lower the sign, to show his face and be proud, but I am not there yet.  There is a secret rhythm to doing such things.  It takes a lot to become a street whisperer.  But I can be that.  I have that skill.  I have a calling.
Posted by cafe selavy at 8:04 AM