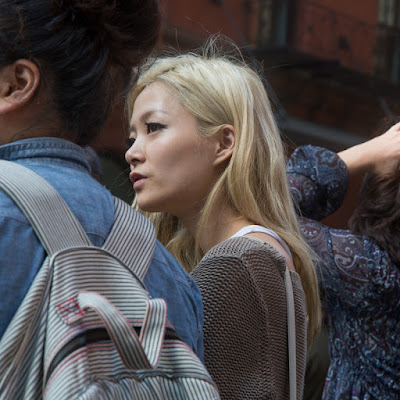 Gray Sunday morning.  It cheers me as did this book review (link).  I always fear I've taken the wrong path in life, but in the end, all paths lead to the same place.  And there is your equality, Q, the great equalizer.  I don't know.  Maybe all deaths aren't the same.  Maybe they are.  Maybe some people are happier to escape this shit show than those who might look back fondly.  It would be much better if we all just went together, I think, at least I would feel better about it.  I simply don't like the idea of other people hanging around after I'm gone, eating and drinking and falling in love and feeling swell.  It doesn't seem right to me somehow.

But there is much about life that doesn't seem right.  There.  I'm telling you something you hadn't realized.  You always thought it was just as it was meant to be.  But I will tell you an old tale that will make you see things differently.

Yesterday, I went to lunch at one of the restaurants I like to have my usual wahoo and red cabbage sandwich (a Wahoo Rachel they call it), and was sitting alone at the bar when a woman I've known for too many years planted a big kiss on my blindside.

She is like that.  When she was young, she was a trademark.  She was the Paris Hilton of our town.  Her father was fabulously wealthy and she was remarkably blonde.  When she graduated from a very private high school, he bought her a magazine to run (that didn't last long).  She drove a gold Mercedes convertible and always looked like she had fallen out of the pages of Vogue, even when she had just woken up.

I was friendly with her then as we were all friendly with one another in a certain large circle that made up the fun part of our boutique town.  In the days before cell phones, we had a certain mythical bar we went to.  Everyone was there.  There were always tales.  Life was endlessly entertaining.

Our Paris ran with a group of beautiful blondes I dubbed the Boulevard Lizards.  They never paid for a drink (as she confirmed at lunch yesterday) and fortunately for me, they were happy to buy me drinks on someone else's tab.  Between the Lizards and the female servers, I rarely had to stand for my own drink, either.

I tell people a thing that they always forget because it doesn't seem true to them or valid in some way, but it is true, and it is this--I've never asked a girl out in my life.  Not once.  Some people will criticize me and say I'm being a braggart, but it is not true.  What is true is that I hung around with females who were very desirable and I got to see how the show works.  I got to see men approach them, buy them drinks, flatter them and flirt with them.  I've seen the power men come with their cars and boats and trips to the mountains.

And I've heard the talk from the other side.

I never wanted to be "that guy."  That, plus I am super shy.  Paranoid shy.

And so, the tale.

I was sitting with two of the Lizards at a table in the mythical bar.  Suddenly one of them looked away and said to the other, "Shit, here comes Slick.  Give it two minutes, and then come pull me away, say we have to do something."

Just then Slick sidled up.  She was all smiles and sweetness and light as they hugged and he bought her a drink.  Then the stopwatch ran out and the other girl came up and pulled the trick.  Oh, she was so sorry and sorry to go, but she'd be back, love you. . . .

Yea, that's how that goes.  Cruel trick covered in sugar.

She is no longer a trademark.  Her life went much like others.  The money ran out, life got hard, a daughter that is gone now, a job. . . .

A friend of mine took another path, got married, good jobs, then a kid that needed special care.  He had a heart attack this summer, then a stroke.  A month later, his wife died in the hospital from a weird asthma attack.  He is left to take care of the boy on his own now.  It is a terrible, haunting thing.

I worry about my life, I guess, as much as anyone and maybe more.  Old Brando died in Greece broke, worn out, and alone (though they say a young woman had been his companion there).  I should stop worrying for the roads, narrow and converge and become one.  I just listen too much to criticism.  It all seems valid and true, and it is paralyzing.  The trick is to hear it and move on.  Even with a bad Achilles and a torn up knee, I've got to remember to dance.
Posted by cafe selavy at 9:34 AM