The Shit Show continues.  Here is the last photo I took with the 13th Liberator 4x5 camera ever made, the Black Cat Edition. 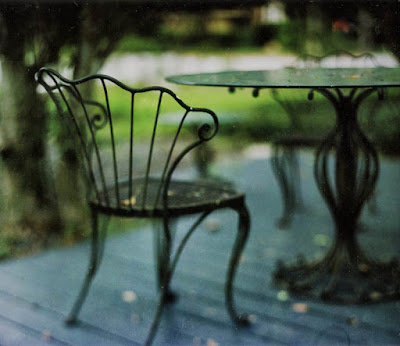 I was using some OLD Fuji color instant film.  They haven't made it for a while now.  You can see why I like the Aero Ektar lens on the camera.  There is a super nice out of focus area with it.  That lens is why I had the camera built.  It is old  enough to have radioactive glass in it.  The Black Cat sure is heavy, though.  I mean really heavy.  Still. . . I have/had plans.  I wrote to the man who made the camera, John Minnicks, and he said to send the camera to him, that he would fix it.  Great, but another heavy expense.

With the Liberator down, I dedicated yesterday to working with the 8x10 camera.  Now that is a REALLY heavy camera.  I have it on an old, wonderful tripod, but it is not made from modern light materials and so moving the camera and tripod around was awkward and tiring.  The only way to know how to do a thing, though, is by doing it enough times, so I took the camera into the yard and began to work.  There I was in a t-shirt and a baggy pair of boxer shorts fooling around, ducking back and forth under a big red darkcloth cape, my hands flailing about trying to find the right knobs to turn.  Trust me, on the Toyo 8x10 there are about 100 of them.  There are sliders and knobs and cranks and handles that move the camera and the tripod in an infinite number of ways.  Making one photograph takes a very long time, but I have aspirations.  After I made a couple of exposures, I took the film holders (oh--I forgot to describe the pleasure of loading those with sheet film in the dark) back inside and mixed up some new R3 developing monobath.  I had gotten the formula wrong the last time I made it.  I forgot to add water.  This time, on the table pictured in the photo above, I did my alchemy as the neighbors looked on.  I think they always wondered about me, but now I am sure to be referred to as the neighborhood nut.  "Double N" for short.

When I had the formula made and siphoned into the big plastic bottle, I poured some into a tray and put it in the big changing tent that covered my dining room table.  Zip.  Hands into sleeves, pull the film, put it into tray.  8 minutes later--this. 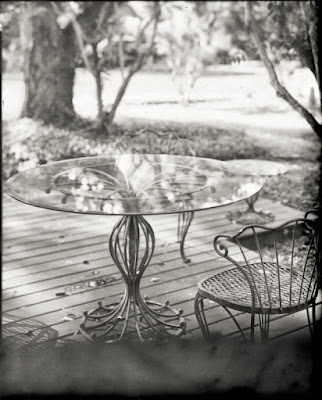 Holy shit--it worked!  Sort of.  The negative was not transparent but had a purple cast to it.  It also had something at the bottom, a blur.  I knew what it was, though.  I had feared it.  The bellows of the camera is drooping.  Something is wrong with the accordion function.  Some of the pleats are inverted.  I thought for awhile, then decided to man up and see if I could fix it.  I took the bellows off the camera and flipped it.  That is one of the things about an 8x10 camera.  It is like leggos or tinker toys.  It is just a dark box with a bunch of stuff attached, just a composite of components.  Taking it apart, I started to feel like a real pro, you know?

After the bellows was turned, I thought I might have fixed the problem.  I took the camera out into the yard to try another picture. 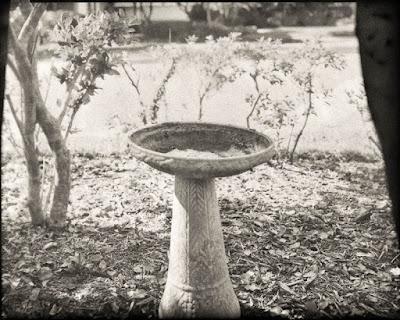 Back into the house, eight minutes of development, and. . . you can still see the bellows in the frame. That and the exposure is way off.  The morning was gone.

I decided to go online and see what it would cost me to buy another bellows for the camera.  $600!  WTF?  I started looking around on sites to find out if there was a way to fix the bellows.  By that, I mean an easy way.  I found out all sorts of things about bellows.  You can make your own if you want (and are handy and patient and all sorts of other things that I am not).  I also found out that they come in different lengths, and I needed a 30 inch bellows for what I am doing.  Realizing I was not going to be fixing the bellows, I went to eBay to see what I could find.  For under $200, I could buy a new one from China.  It looked short, though, and not the 30 inch one I need.  I wrote the seller asking the length of the bellows, but I have gotten no reply.

It was now afternoon and hot as hell, and I was growing weary of loading film holders and dealing with chemicals, and I thought about the 8x10 Impossible film I had in the garage.  The old Polaroid film processor was broken, but I thought I would try it and see.  My memory was foggy on this.

So I lugged the camera onto the back patio off the bedroom and pulled out the processor.  I had forgotten how to work with the film from start to finish, I realized, so I went inside and watched a YouTube video that got me back up to speed.

For the rest of the afternoon, I tried to make an instant image, and each time, the processor almost but didn't quite work.  Each time, I had to take it apart and clean the horrible chemical paste off everything, put it back together, and try again.  Failure, failure, failure.  Each one was to be my last, but I went through about $200 of film.  Sweat was pouring off my face and dripping onto the film, the processor--everywhere.  I had chemicals and rags and waste everywhere, but not a picture to show.

I went inside and Googled "Polaroid Processing Tray Repair" and found a shop in Maine who might. I wrote him an email and he responded immediately.  Within a few minutes, he had guessed the problem and told me not to bother to ship it to him.  It was probably the pins and he would have to break it and then see if he could fix it.  He didn't sound interested.

It was about five o'clock when I had everything packed away again.  I really missed my studio.

I don't know if I want to work with film any more.  I might just sell all of the film cameras and stick with digital.  I have specialized Polaroid film cameras that they don't make film for any longer.  I have 8x10 and a couple 4x5 cameras.  I have a Hasselblad and a Rollei.  I have a Leica M7 and a Leica R5.  And all the lenses.  I have a Hasselblad Xpan.  Jesus, the more I think, the longer the list gets.  I have Olympus X cameras and drawers full of old rangefinders and a mess of Holgas and old Dinahs.

It is Sunday, the last day of my "vacation."  It is back to the factory tomorrow.  I did nothing.  I will make dinner for my mother who I haven't seen for two weeks.  I have been a hermit with his head either in the sand or up his ass.  I need a car.  I need a lot of things.  The curse is on me.  The "Shit Show" continues.
Posted by cafe selavy at 7:58 AM