Here is the picture I tired to make over and over again with the Impossible Instant 8x10 film--without success.  In the end, just before putting the big camera away, I stuck in some regular black and white film  just because I wanted to remember what it was that I worked over all afternoon. 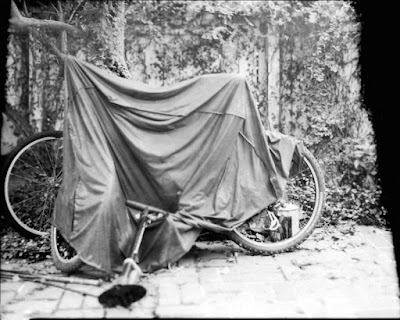 You can see the bellows intruding on the right side of the picture.  I don't know how I missed focus on this, really, except that the depth of field with big cameras is much shallower than on small ones.  I am learning that.  The furthest tire is sharply focused.  It is only inches from the tire in front of it, but the falloff is steep considering I shot this at f11.  Still, there is something intriguing about the way the image looks.  I'm not giving up on the 8x10 yet.  I got an answer from China and the bellows they can sell me is long enough.  There is that.

I gave in and ordered a $200 plus dollar part for the Polaroid processor from a fellow in Israel.  As punishment for this, when I took my Black Cat Liberator to the FedEx office to ship to John Minnicks for fixing, the transmission in the Xterra wouldn't shift.  Needing a car but buying photo stuff.  True idiot, me.  Don't you like the picture though? That is the patio off my bedroom.  Looks like a little piece of France here.  The power of big black and white.

Sunday--my last day of "vacation"--was big.  I went out of the house!  True.  I woke up early in spite of taking two Aleve PM after drinking. . . well, let's not get into that.  I woke without waking, though, and stumbled my way through the morning darkness.  In spite of that, I went to the exercise course as I had planned.  I felt bad but good and had a better run than I have in years (which isn't saying much).  My knee was fine, but as luck/fate wants it, I tore my left Achilles tendon.  It is bad.  I know you don't want to read my medical checklist here, but that is not the point.  The point is that my run was like my luck with the cameras and the house and the car and with everything else.  I am cursed.  There is no winning.

The good part about the run, though, was that it made me hungry enough to want to go to breakfast.  I'm saying that on the last day of my un-vacay, I finally started to move.  I went to the greasy little joint I keep swearing I'll never go back to but always do.  Bacon, eggs, grits, and toast left me feeling like a heart attack.  The place was crowded, and after a week in the house, all that movement was kind of freaking me out.  I don't feel myself yet, don't feel my usual cockiness and confidence, so I was ducking and bobbing like Barney Fife.  I wasn't ready to go back home after the meal, though, so I went into the record/bookstore next door, the little hipster place with all the cool bric-a-brac.  I looked at the CDs that were in the listening rack and saw one that looked intriguing--Case/Lang/Veirs--and put on the headphones.  And suddenly, I was winning.  It was a small pot, but better than taking nothing or continuing to lose.


It is music for headphones with the volume turned up loud.  And it is music for a moody boy at the peak of his menstrual cycle, all emotionally disjointed.

After listening to that and looking through the hipster books of things I'd read when I was in my twenties (fun, that), I decided to drive downtown and see what some other people looked like.  I had cameras, and I thought that maybe, perhaps, I might. . .  but then, that didn't matter as a light rain began to fall.  It hadn't stopped people from being out, though, and my heart beat faster as I drove past the crowds and past new restaurants on side streets that hadn't been there last time I went downtown, and suddenly the world seemed like someplace I might want to go to again.  I parked the car on a distant street and grabbed my cameras after all, but I caught a glimpse of myself reflected in the car window, and I knew it wasn't right.  I was not ready for engagement with people yet.  I knew I was through for the day.  I got back in the car and made my way back home.