I Need a Sympathetic Sponsor--Please! 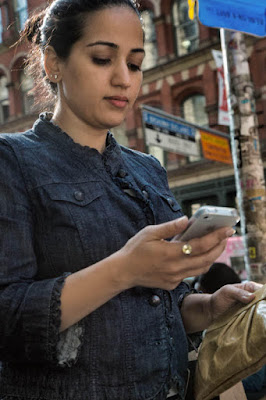 This picture is one of my weekend projects, but you won't be able to tell.  It is a digital photo that I converted to black and white, then painted over in Photoshop.  After that, I blended it with the original color photograph to punch the colors just a bit.  I used to do something similar years ago.  You need to have time to work at it.  In the end, though, as with this one, I'm not sure anyone would know unless I said something, so it is probably not worthwhile.  But it gives me ideas.  What if I did this less subtly and pasted it onto a board, then put encaustic wax over it and then transferred an image of one of those groovy NYC advertising bills over the top and began scraping away at it until the image underneath began to appear?  I could drizzle some paint on top of that and just let it run into little points toward the bottom of the frame.  I've done something like that before, but not that exactly.

I just need a studio, that is all.  My old studio is still empty.  I went by on Sunday.  I thought about finding someone to split the rent with and trying to move back in.  I have so many ideas right now that would be much, much easier if I had a large workspace.  I'll look for someone.  I need that studio again.

I haven't slept much the past three nights.  Shit travels through my brain.  To calm myself, I think about making art--hence. . . .