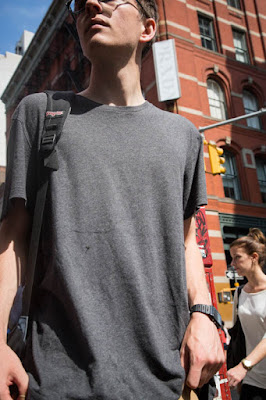 I woke last night to a "thump" on the bedroom door.  I stayed awake for a minute listening to see what was next but began to drift off to sleep again when it sounded as if something had fallen off the bedside table.  I had visions of spooks but looking around the room and seeing nothing, I dismissed the noise and began to drift off once again.  Then there was a "thump" on the bed.  Too weird.  I could see that there was no one in the room, but I rolled over and turned on the light.  I looked around and saw that nothing had fallen from the nightstand and nothing was laying in the bed with me.  WTF?  Then I saw something on the floor.  What was it?  A mouse?  That would be bad.  I got up slowly and the thing leaped like a kangaroo.  A frog of considerable size.  Not a toad.  A big legged frog.  Harmless, I thought, and turned off the light and went back to sleep.

When I got up in the morning and went to the bathroom, he followed me, I guess.  There he was peaking around the corner of the cabinets.  I finished my business and got a towel to throw over him.  He was a wily one, but after a few minutes, I got him wrapped up and freed him to the wild world of nature.  He just sat there looking stunned.  I hoped he was o.k.

It might have been a she.  I have no idea.

Yesterday on a walk, I saw a big, orange moth as ugly as anything you have ever seen either being stung to death by a wasp or was giving live birth.  Moths don't give live birth, though, so I moved closer to the monster to better see.  It seemed the species of which I had been ignorant my entire life had radically different male and female forms.  The big, ugly orange thing was pulling a much, much smaller black thing with wings that was way up its butt.  Mating, I presumed.  It was jarring.

I am jittery this morning and tired.  I will go back to bed eventually.  Things are weird every way I turn.
Posted by cafe selavy at 9:08 AM