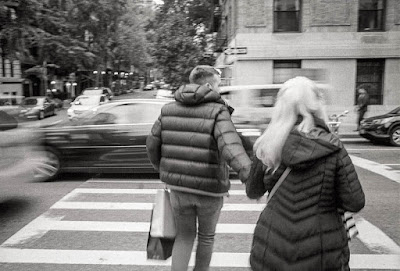 It has been too long now since I was in NYC to tell the story chronologically.  It is all slipping away.  Chronology is such a bourgeoise idea anyway.  Let's dispense with all that, though this was the first film picture I took in NYC this trip. Trapped in the middle, I start at the beginning, bourgeois through and through.

Shooting film is a hoot, you know.  I'd forgotten how much different it is from digital pictures which always come out as you expect.  I mean, they are replicable and perfect.  I got back the film from the trip and began to scan, and when the images came up onto the screen, there were the imperfections.  You shoot.  You don't know.  Was the shutter too slow?  Was there lens flare?  Even the colors of the black and white (yes, there are colors there) differ.  The grain shows differently depending on the background.  Everything varies a bit from roll to roll.

And I had forgotten another thing.  You lose rolls of film.  When I got home, I was sure I was a roll shy.  Looking through the proof sheets, it was confirmed.  Film rolls are like glasses.  Sooner or later, you will lose a pair.

I searched through all my bags one last time and have found it.  It sits beside me now, mysterious and secretive.  No, film is not like digital files at all.

I don't know how New Yorkers ever got the reputation of being unfriendly.  They are, I find, among the friendliest people in the world.  I guess that because there is such a dense population, you run into a fair share of assholes.  But try coming to the sunny south and meandering around some cracker countryside, and you'll know what I mean.  The ratio, though more diffuse, is much, much higher.

There was a cat at the Algonquin named Mathilda.  The story is that she has the run of the hotel, but she must be wise for she was mostly out of sight.  One day, though, she was sitting on the counter by the check-in desk, and my companion went over and petted her.  The staff were surprised.

"She doesn't like for people to touch her," said the woman at the desk.

"Animals like me," said my companion.  And indeed, Mathilda and her seemed to have a bond.

"Animals enjoy children and simpletons," I joked.  It was not always a happy trip.

Sundays in New York are feeling things.  They have a vividly stratified emotional calendar.  Lazy, quite mornings.  Recreational afternoons, then the drifting away, streets clearing, the lonely emptiness of evening boulevards.  It was our last night in town, and as I said, it was not always a happy trip.  We could not agree on where to eat, so we got a table in the hotel restaurant.  I hadn't much hope for the food, and I was right.  It fit the mood, I guess, maybe even enhanced it.  What comes between people at such times?  Unfulfilled desires?  Unmet expectations?  The weariness of personalities?

The lobby and restaurant were quiet, and the music was perfect.  We were in the very place of Dorothy Parker and the Vicious Circle.

I do not like my state of mind;
I'm bitter, querulous, unkind.
I hate my legs, I hate my hands,
I do not yearn for lovelier lands.
I dread the dawn's recurrent light;
I hate to go to bed at night.
I snoot at simple, earnest folk.
I cannot take the gentlest joke.
I find no peace in paint or type.
My world is but a lot of tripe.
I'm disillusioned, empty-breasted.
For what I think, I'd be arrested.
I am not sick, I am not well.
My quondam dreams are shot to hell.
My soul is crushed, my spirit sore;
I do not like me any more. . . .

(expergated)
Posted by cafe selavy at 8:47 AM