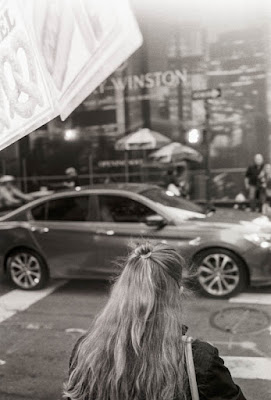 If I could do this every time, I would.  This is the look.  It just jumped out at me from among the others.  The flare, the blur, the distance, the color. . . I don't know.  But this is it.

My traveling companion caught a terrible cold in New York.  Now I have caught hers.  My throat is screaming, my body complaining.  I will stay home from the factory today and try to rest, though I know the roofers will be coming to finish up their job.

I am missing the best weather of the year.

But NYC in the 'teens.  We took a cab to Chelsea, got out on 25th.  We'll start here, I thought.  The first gallery there was Pace.  The show was Michel Rovner's "Night."

"Night, Rovner’s new solo show, will be radically different from the artist’s previous exhibitions. Rovner’s encounters with darkness generate nocturnal images, capturing moments that are immersed in shadows. The works reverberate an unfamiliar dimension, a sense of fear and alertness, primal powers and the night within us."

I wish I could show you a gif to the exhibit, giant walls of projected hyenas shot with night vision cameras, eyes shining, shifty shapes moving slowly in the background.  It was effective.  I've tried to find something on the internet, but I can't.  Probably too soon.

We popped into a couple of other galleries, but they did not have the power of the exhibition at Pace, and soon we were hungry.  My companion wanted famous NYC pizza which I had told her was great due to the water.  Everything in NYC is better because of the water.  So we stopped at a pizza kitchen around the corner that was recommended by the Pace receptionist, a pretty woman in a black outfit who I immediately trusted, and had a small pie and beer.  And we got lazy, of course, and so rather than touring more galleries, we headed up to the High Line which I had never been on, and walked down to the new Whitney Museum.

I was not impressed.  The High Line seems like Disney compared to the streets, tourists stopping to sit in the sun while eating cart food made for tourists.  It was nice, I guess, if you are a New Yorker and need a break from the relentless cement and traffic on the lower west side of town.  It was probably very nice.  But for me, fresh from a lifetime of manufactured happiness (sameness), it was a bore.

As is the Whitney.  I saw the building and read about the exhibits, and that was enough.  As always, there is a single floor that I would like, that housing the permanent collection, but the rest. . . I tire of walking into a room full of string or a video installation of people sitting on chairs, or black cylinders of varying sizes positioned just so.

I have no artistic taste, it seems (link).

I prefer a picture we can argue over.  Here is a photo I took with my phone of a painting at the Met.  What is happening here?  My companion and I disagree.  I am of a different turn of mind, perhaps.  But we could probably argue over the juxtaposing of string just as well. 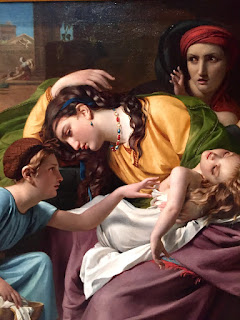