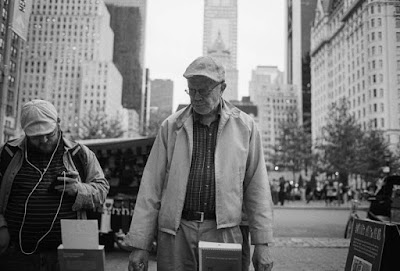 I read an article today about a fellow who jumped a plane to get a barbecue sandwich.  He says he didn't regret it.  I want to be such a person.  Nobody can take such a thing away from you (as they used to say).

I am living too carefully, and all I have to show for it is a bunch of house repairs.

But the world will make you fearful sooner or later.  I keep reading the tagline "angry old white men" in the newspapers.  Seems it is O.K. to say that without being disparaged even in the liberal press.  Crazy, that.  Try saying "angry old white women" and see what happens.  But of course. . . patriarchy.  The title of Cormac McCarthy's "No Country for Old Men" has become a much used idiom, though I think the irony of the title has been lost somewhere along the line.  One wouldn't want to not throw rocks at that tower, however.  Let the stoning begin.

The man in this picture taken on the 59th St. border of Central Park is looking at books.  Of course he is.  Me, too.  My friend C.C. tells me that I might have the wrong idea taking refuge there as I might pick up some ideas.  "Ideas are bad," he says.  "Nothing good ever came from one to my knowledge."  It is a running gag between us.  We have begun to wish we had spent our time making money instead of reading books and looking at art.  Books and their crazy ideas are what ruined us.  We agree.  They have made us unfit for proper company.

Kids today have less chance of being corrupted by books, of course.  All those words are a drag.

Just to cheer me up, C.C. also sent me this link today.  Well, at least we're not leaving much when we go.

Still, I'd like to hop on a plane and go somewhere for a day or two just to see what's left outside the digital world.
Posted by cafe selavy at 8:37 AM