And the Answer Is. . . DeQuincey 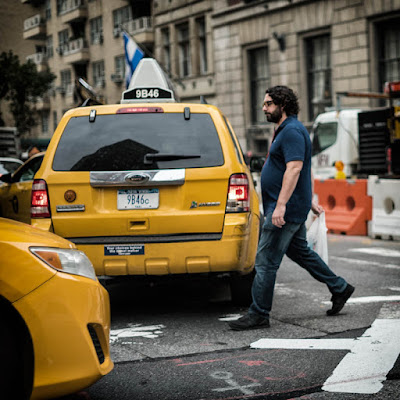 Here's a little color--shot from the cab window on the way into NYC.  No matter.  It's all shit anyway.

Trouble is, I can't remember what makes me happy.  I am not.  Maybe it is the illness, maybe something else. I just wrote that to C.C.  He quoted Beckett as saying it was misery that made him happy.  I may have to let that settle in.

I think, though, that I have refuted my own ideas of long ago.  "Why aspire to happiness?" I asked.  "You don't learn anything from being happy."

I said that much when I was younger.  That must have been pre-Facebook days, before everyone strived to show how fucking happy they are, how much fun their lives are.  It is not their "happiness" that bothers me, but that maybe I got caught up in it.  Perhaps as I got older in a younger world, I wanted to show that I, too. . . was part of the world "now."


*     *     *
I wrote that last night at dusk, the most dangerous time (except for all the hours following).  When asked how he gets through it all, one friend replied, "Drugs."  And perhaps that is the correct answer.  How did people suffer through prior centuries full of the worst sorts of illnesses and discomforts and death?

I read a review this morning of a new biography about Thomas DeQuincey (link).

"De Quincey rendered himself eminently censurable with his masterpiece, “Confessions of an English Opium Eater.” In the years of his prime he was a drug fiend discriminating enough to satisfy Burroughs and Leary. He didn’t really “eat” opium, per se, but took it in the form of laudanum, the narcotic’s commonly ingested liquid form. He had pedophile tendencies — “nympholepsy,” he called it. Dead girls, particularly, fascinated him. The fetish arose, Wilson surmises, from finding himself, at age 6, alone in a sun-drenched bedroom with the corpse of his 9-year-old sister. As the twig was bent, so the tree was (mis)shaped."
I hope the book is as wonderful as the reviewer would have us believe.  I will order the book today.  DeQuincey, it was reported, was up to 10,000 drops of laudanum a day.  Is that a lot?  Can you still get laudanum?  In spite of everything, DeQuincey lived to be 74, not an inconsequential age in the nineteenth century when medical science was much lacking.  Laudanum would seem the perfect drug for the aging, one to palliate pain and stimulate the imagination.  This just as America is campaigning against the use of opioids.  My usual luck.

That something is wrong with the emotional and spiritual lives of Americans is doubtless.  We are a troubled people subjected to the ideologies of the upper class and the educational elite.  And the two couldn't be at further poles.  I don't want ideology.  They are all shit.  Ideologies make me miserable, at least the public ones which we must either reject or subscribe to. I don't mind the private ones so much that are masked by art, that are not "-isms" proliferated by self-declared "-ists."

That helps me a bit, I think, just writing it out.  Now if I can find a source for opium, I might make it through the the days and weeks and months ahead.  And that. . . that would be something.
Posted by cafe selavy at 8:20 AM