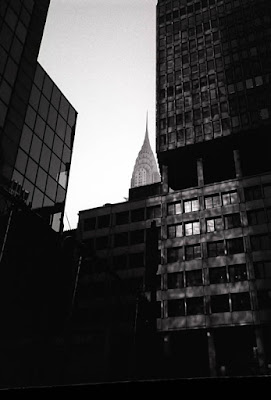 Sicker today.  Of course.  That is how viruses work.  My friend tells me I will feel pretty bad for five days.  I thought I was going to kick this thing, but I think she is probably right.  Still, I can't stay away from the factory forever.

I sent the Leica M Monochrom back to the seller.  I almost couldn't part with it, bad sensor and all.  But now that it is gone, I do want a good, functioning one.  It is a sweetheart of a camera.  Digital cameras, however, are like computers.  They are not good investments, just tools of the time.  When manufacturers come out with a new one, the one you own. . . well, it is like owning an old Macintosh.  They don't increase in value.  I like digital cameras for some things, but somebody else needs to buy them for me.  When I read new camera reviews, it seems that the reviewer is always given a so-and-so camera to test.  There's the way.  Leica and Canon and Nikon should just give me cameras and keep me up to date.  My digital cameras are all older, now.  I have a Nikon D-700 that I loved, but it is several generations behind.  My Canon 5D Mark III has just been upgraded.

But a film camera lasts.  They are not making any better film cameras now.  I have some top of the line film cameras that will never be surpassed.  Film cameras ARE more of an investment than are digital cameras, and they cost less.

Until I decide to buy another Monochrom.

I truly wasn't allowed to make photographs in NYC.  I have a bare few, so forgive me or indulge me on these images.  This is my favorite landmark in New York.  It speaks of the truly modern that I love.

We walked the streets relentlessly, but they were not the same as they were before.  So much is gone. All the little shops have moved out.  Rent is too high.  There was, however, a new bookstore on Madison Avenue.  I didn't stop in, but it made me feel much better knowing it was there.  I thought the flagship Ralph Lauren store was gone, too, but it was there where it has always been in that fabulous home of I forget who.  And though we were dressed like bums, we stopped in to see Bemelmans Bar at the Carlyle.  I have always regretted not seeing Bobby Short perform there while he was alive.  I certainly have no interest in listening to Judy Collins.  I should, though, make a point of listening to Woody Allen sometime soon before that is all over with, too.  But we all will always have Bill Murray's Christmas Special there forever and ever.

I have no stories today, it seems, only laments.  I shall move on to dirges soon.