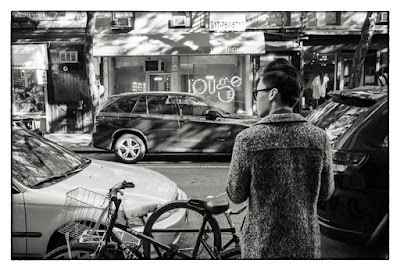 I slept too late this morning.  I woke to the irrigation repairman knocking on the door.  It is very rare for me to sleep this late.  I got up but didn't wake up.  I'll stay in this fog for the rest of the day, I can tell.  Maybe I'm ill.  I don't know.  I should feel better than this.  One of the many things I've been keeping from you is that I had a doctor's appointment yesterday.  I didn't want you to worry.  I had a "thing" pop up on the skin of my left shoulder in New York.  It was round and red and, I thought, could have been a fungus.  When I got home, it changed color and started to flake.  Ili and my mother both insisted I go to the doctor.  I don't go to doctors, and every time I do, I am certain it is my ticket to the morgue.  They both said it was probably nothing which scared the shit out of me.  If it was probably nothing, why would I have to go to the doc?

Believing the worst, I made an appointment with my mother's dermatologist.  Yesterday afternoon, I went in, heart racing, bp sky high.  I tried to be stoic.  Whatever the news, I would bear it.  I didn't have to wait long.  The doctor looked at the spot and said he was pretty certain it wasn't cancer.  It was probably a bite, he said, that turned into a fibroid or something.  He would cut it off and send it to the lab to be safe.  But my fear was only partially allayed as I grew up a little cracker kid naked in the sun, never wearing shoes or shirts, brown as a nut, and then later, I surfed and still later, when I bought a sailboat, I liked to stay naked like Tarzan .  Then there was the sun exposures at high altitudes when mountain climbing.  After all that, this was the first time I was going to have my skin checked.  I had a couple of spots that were surely, I suspected, melanoma.

It didn't take him long.  I was clean as a bean.

I am happy my friends.  It is good to have Moroccan blood.  Still, I will limit my time in the sun from now on.

Oh. . . by the way, by irrigation, I mean sprinklers.  I'm not getting a colon cleanse in case that is what you were thinking.  I know how to fix the sprinklers, but it is a pain in the ass and I don't want to do it.  There are too many heads and PVC pipes that have been broken by the tree guys, the roofers, and by my own loyal yardman.  The fellow has been out there an hour and a half and is sopping wet.  I have reached an age where I will let repairman do everything.  I am done with all of that.

I watched the Cubbies win the pennant last night.  Almost.  I went to bed an inning after old man Ross hit his home run.  That counts, right?  I'll watch a replay of the last few innings.  I know.  I can't help it.  I get tired.  You have to live on the west coast if you want to be healthy.  They always get to bed at a decent hour.  The networks are trying to retard kids and kill the aged here on the east coast.  No one gets to bed until after midnight.  I've sworn not to be their victim any longer.