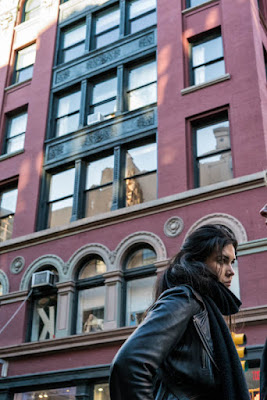 The Vespa has added a new dimension to life.  People see it, they comment.  When I'm riding it, people wave.  It gets me out of the house and into adventures.  It takes me new places I wouldn't have bothered going.  All those things.

But yesterday, with Ili on the back, I crashed it.  I don't know what happened.  From a dead start at a stop sign, I took a left onto another street.  It was just a normal turn.  I leaned my head back to say something and next thing I knew, in slow motion, I was swinging too wide and heading toward the high curb.  I probably made a mistake letting off the gas because I had no real turning control.  So, slowly, we angled toward the inevitable.

Ili had jumped and I went over with the bike.  I heard the scratching of the metal on the cement.  When the bike came to a stop, I heard the laughing of a madwoman as she drove by.  I mean, she really got a kick out of it.

My first concern was Ili.  Jesus, she had said she felt so comfortable on the scooter with me.  She trusted me, she had said.  No breaks, no bleeding, but some scratches.  I picked up the bike and looked.  I had ruined the paint.

"Yea, I'm alright."  I could feel the tightness beginning in my bad lower back.  Mostly, I was just sick with embarrassment and inability.  I started the scooter and Ili climbed back on.

The thing about riding a Vespa is that it is quiet.  It is easy to talk.  I told Ili how awful I felt and she said it was O.K., of course, but I could hear that thing in her voice that was saying, "Why'd you do that.  I'm O.K.  Why'd you do that?"

And I don't have a clue.  It was like an invisible hand just took control.  Ili kept telling me that she thought it was her fault, that she was leaning all wrong and then when I was trying to turn and right the bike, she was struggling to get off.  She thought it would help, she said, but she thinks that's why we went over.  I don't know.  It was just a real slow motion crash.

I know a YouTube video of it would look hilarious.

Of course I didn't see her.

"She must have a miserable life."

"I can't believe I fucked up the paint," I said.  "I guess its a good thing I didn't buy an expensive one."

I'm still sick about that this morning.  I think about it every time I get a pain in my back.

It didn't stop us, though.  We went to my mother's to show her the scooter.  Then we went to a part of town we never go to sit outside at a Mexican restaurant overlooking a lake and have drinks and dinner.  I needed the drinks.  And after dinner, we headed out into the night, the changing temperatures, the thermoclines, caressing our skin as we slipped slowly through the darkness.  We drove and drove, taking to highways we didn't think we would ride on.  A fellow on a little scooter waved.  At a stoplight, we pulled up behind a man and a woman on two big motorcycles.  They turned around with big smiles and said, "Hey!"  Ili liked that.  We drove down the Boulevard and then to the grocery store.  We cruised until we couldn't think what else to do.  And then we came home.

We got back on the horse, so to speak.  Even now, like the scarred and wounded Vespa.