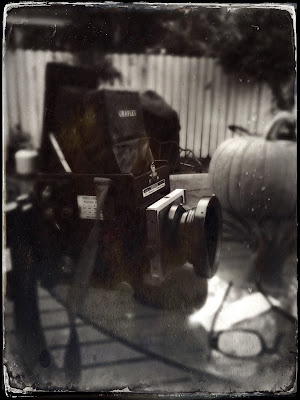 Thanksgiving ended up being a very busy day here at the old homestead.  Mimosas in the morning with a breakfast casserole to kick it off.  Then, as the cooking day got underway, the stream of people began its steady flow.  My mother at noon, then a string of friends.  My tenant had people over, too, and, since many are mutual friends, she sent them over while she prepared her own T-day repast.  I had the Black Cat Liberator and some of the remaining Fuji Instant 4x5 film on hand and took mandatory portraits of everyone who came.  The lens is a tricky one, though, and with the lens wide open at f2.2, I kept missing focus.  I only had to be off by about two inches.  That is the depth of field at that aperture, I think.  But I learned about using this camera again.  I don't have to shoot with the lens wide open.  I know that now.

I have old friends, twins, who came to dinner.  One of them is quite a cook/chef, and Ili was glad to have his technical help.  The turkey came out perfectly wonderfully delicious.  The table was a work of Ili's art including the poppers.

After eating, though, I was exhausted and full of wine, so I excused myself from the table and went to lie on the floor, belly up, an inch from snoring.  Everyone gathered around in the living room getting comfortable on couches and in chairs, and I thought, "uh-oh."  Quick as a rabbit, though, my mother said, "let's take a walk," and that was the end of the party.  The twins were for more drinking, not walking, and so they bid us adieu.

Back from the walk, the clean-up looked enormous.  It was.  And since Ili had spent most of her time preparing, I started scrubbing the pots and pans and cleaning up the dishes and utensils.  I am good like that.

I think I got the good end of the stick, so to speak.

After cleaning up, we filled containers with turkey and dressing and homemade cranberry sauce and all the rest for my mother to take home.  Hugs as the day began to go blue. . . then the first scotch.  The tenant had set up her Thanksgiving day table in the yard between the apartment and the house.

"Do we need to go have a drink with them?" I asked.  Apparently we did, so we took our drinks and sat at the giant table that had already been cleared.  Some of my neighbors had come over now.  The party had grown large.  It was a nice crowd, a good one, but I had grown too weary of people and the smiling and the careful, t.v. voices, and after a few minutes I nodded to Ili who nodded back.

"We want to take a Vespa ride and have to get to the liquor store," I said as I rose to the common objection.

"You're drinking scotch and are going to ride the scooter to the liquor store?!?!"

I knew the store would be closed, but I wanted to make a big, quick exit.  I wanted to get back to the quietude that is my life.  The air was cooling, the light fading.  We made a pass down the Boulevard.  The Christmas lights were up and had been turned on for the first time this year.  Only a few people were out at the one or two open restaurants.  The avenue was empty.  It was just us driving through the cool, sophisticated light.

The holidays.  They have begun.
Posted by cafe selavy at 8:57 AM