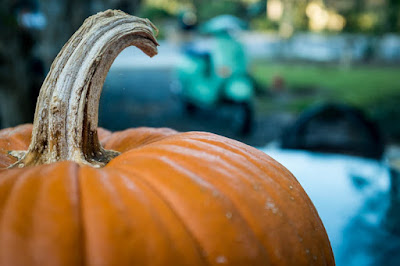 Played around with Q's Fuji X100 yesterday a little bit.  It weighs negative zero and has loads of features.  The one I am enjoying most is the macro focussing.  The Leica weighs an inordinate amount for its size, and one of the drawbacks for me is that you can't focus closer than about three feet.  I could never have taken this photo with my Leica.  Having said that, though, the Fuji is really the best snapshot camera on the market.  It isn't a Leica.  Still. . . I think I will have to have one.

Pumpkin and Vespa.  This is my October/November experience.

Last night, I watched "Roman Holiday."  I'd never seen it before--probably because it stars Gregory Peck.  But it was the kickoff of the holiday movie season in my household.  Audrey Hepburn was cute, so there was that, and they rode a Vespa, so there was that, too.

Then the air turned cool in the night, and the day will be bright and beautiful.

I have been told that if I want to continue having a passenger with me on the Vespa, I have to change my behavior.  Yesterday, I got into two altercations, one with a group of fellows in pickup trucks and the other in front of a crowd on the Boulevard.  I can be aggressive in retaliation, I guess, and am an embarrassment to my passenger.  She is right, though.  Sooner or later I'm going to be sorry.  So from now on, it is sissy, pacifist C.S.  The most they will get from me is a sad shaking of the head that says, perhaps, "You've disappointed me so."