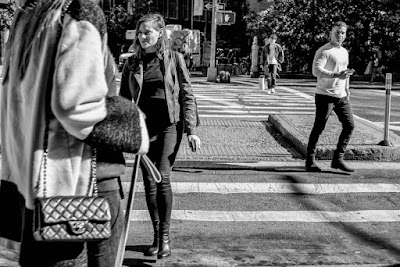 For my friend, once again--the disapproving look.  The guy in the background of the photograph appears butch.  He is a masculine trope.  Is it natural, or did he learn that from watching Sports Center?  I've been around it all my life and am not sure.  He is a protector of a moral order, you see.  I ask people often to explain their moral standards to me.  Many are Christians but cannot remember many of the Ten Commandments.  That's O.K., I say.  Just tell me the most important aspects of your moral code.  They can't come up with it on demand.  Take some time, I say, a day or two.  What I have learned from this is that most people live by a morality that they cannot describe.  It is vague and second-hand, but it is what they use to judge others.

When they finally come up with something, though, I ask them to pay attention to it for the next week or so and see how many times they are in violation.  If it is any good at all, it is challenging.  And sure enough, they report, there are the occasional violations.

Their code, I find, is usually a bit different from the codes of the people they are judging.  I mean, not everyone articulates the same moral order.  But, I point out, they are using principles they find difficult to follow to judge others who do not share the same principles.  How in the hell do we even live together, I wonder?

That is a big extrapolation about a guy in the background of a picture who is looking at the camera.  Hell, he may be a moral exemplar.  I don't know.  Here, he is only a figure.

But, I think, that is one explanation for the Trump presidency.

Q sent me his Fuji X100 camera to use for a couple weeks so that I can see if it will quell my urge to buy a digital Leica M for many thousands of dollars.  Right off the bat, taking it out of the box, I saw pros and cons.  It is light.  I mean really light--filled with helium light.  That is a huge plus.  Looking through the viewfinder, though, is difficult.  It seems smaller than the ones on my other cameras, and maybe it is. I haven't shot with it yet as I was ill yesterday and had no interest in anything but what was happening to me.  I feel better today, though, and may take it out and fire off a roll.  Just a joke.  It is digital.  But it is a cropped sensor camera and that is something of a negative, too.  I'll download the files, though, and work with them and see what I think.

I can get one on eBay for about $800.  But will it stop my hunger?  I keep looking at the Leicas.  I don't know.  I don't know.  I will have to figure out where all of this falls into my well-defined moral code.  But, I think, I would have to say that I am a bit of a Libertine.
Posted by cafe selavy at 8:03 AM