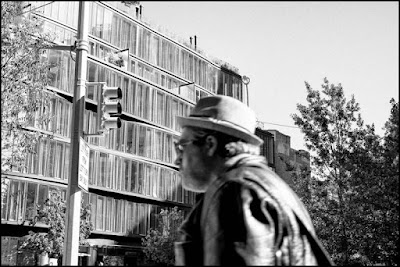 The knee is worse than I thought.  I can't sleep for the screaming, piercing pain.  It is worse this morning than it was last.  I will make an appointment with the orthopedic surgeon who fixed my other knee.  I will do it right away.  It has been almost two years to the day that the other one was fixed.  I want to be running again by Christmas.

Running again?  Ha!  I haven't run over two miles in years.  But I want to be able to do something.

I'm trying not to let it stop me, though.  Yesterday was a Vespa day.  I drove it to the big city miles away.  I was alone, so I goosed it up over 50 mph.  No problem.  There was plenty of speed left.  I like this scooter a lot.

I drove downtown and had a beer mid-afternoon outside.  I sat and listened to the conversations at the other tables.  The way there was winding, and I took streets I'd never taken before.  At least not that I remember.  Meandering residential streets.  I went past Q's old home where he made a short movie once back when he was a kid.  The day was bright and the air dry.  People were still at work which made it all the better.

I had to get the scooter back to my side of town, though, to let the mechanic have his way.  Turns out, I've been driving around at night without a light.  But everything else looked good.  He said he'd been working on nothing but Vespas for ten years, and he had only had to go into the engine on them twice, both times because they had been sitting idle for years.

"They will run forever," he said.

Back home, I picked up Ili and we went a-riding.  We hit the arthouse movie theater outdoor bar for happy hour.  We ordered two Madras.  Back on the bike, we headed home only to find the maids had come, so we scooted up the street to a little hipster cafe where we got a beer.  Another ride, and finally they were done.  Ili bought crab legs in the afternoon, so we set them to boil and opened a bottle of wine.  We tried to watch Fellini's "Amacord" while we ate, but you can't read a movie while breaking open limbs for meat, so we switched over to Anthony Bourdain to whom no attention must be paid.  I iced my knee and put on Aspercream (true), then took two pain relievers and went to bed.

I woke in the night screaming.  It was off and on for the rest of the night.

The world looks differently to a painful gimp.  It is another beautiful day, and I know where I'll ride, but walking. . . well, that may be out of the question.