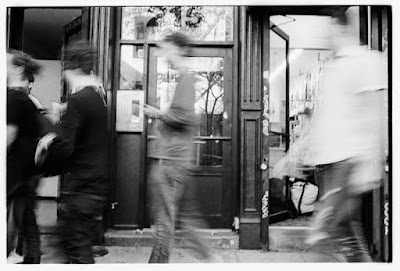 I took the day off yesterday.  I had to visit the doctor to see if I had a flesh-eating bacteria.  The spot on my shoulder where he cut off something that wasn't cancer looked ugly, and all around the wound were pus-oozing eruptions.  I went knowing that the best I could hope for was amputation of my left arm at the shoulder.  If not that, I was certain they would jet me off to an isolation ward and put me in some sort of barometric chamber.

When he looked at it, he told me I was a whiny little bitch and kicked me out of his office.  Apparently everything looks fine.  I've had an allergic reaction to the bandaids.  He called it "a classic case of dermatitis."  I told him that didn't mean anything at all, that it was the most general of terms and described all skin inflammation.  That is when he threatened me with a scalpel.

Since as far as I knew I wasn't dying, I called my secretary and told her I wouldn't be in.  She was quite happy about that.

The day was most lovely, but it flew by at supersonic speed.  I went to the gym and then Ili came over for a scooter ride to lunch on the Boulevard.  Wahoo sandwiches and sangria and then home for a nap.  I know it is my own fault, but naps are so rich and wonderful after an afternoon full of wine.  Up at five, we poured some rum and tonics just to get us going, then we went marketing on the Vespa.  Everywhere we go on it, people wave and comment.

After the marketing, we came home and put away the goods.  And then, we just went for a ride.  The sun was low in the sky and it was getting chilly.  We decided to go for pizza and chianti at our favorite Italian restaurant.  Everyone was out enjoying the weather.  Everyone was beautiful.  That is the way it is here on a cool evening in my little hometown.  We sat at the outside bar and ate and drank and watched the beautiful people go by.  When we were finished, we walked a bit but decided to make a change and go to a little hipster place away from all of this instead.  Irish coffee sitting at a long table in bohemian room decorated to challenge your senses, people sitting here and there, all digitally connected except for one sad older fellow with a book and a reading lamp.  Ili found an edition of poems by Lorca next to her and began reading. I watched a young girl drawing with a stylus on a large digital notebook.  Her boyfriend took pictures of her with an enviable camera.  Two heavyish girls sat together at a table on a stage with red velvet curtains laughing at the things they showed one another on their phones.  Three young Country Club College students, too young to go to a bar, sat with coffees and laptops.  It was a home away from home for those who had nowhere else to go.  I want to come here evenings and write, I thought.  I knew I wouldn't, but it seemed a comforting idea.

Then back out into the cooling night air, and then we were home.  Ili had taken the Lorca book (I think it is a take one, leave one thing) and sat on the floor reading aloud while I sat in a leather chair with a fresh scotch.

This is the way it was if I leave out everything to do with politics.  You are welcome.
Posted by cafe selavy at 9:26 AM