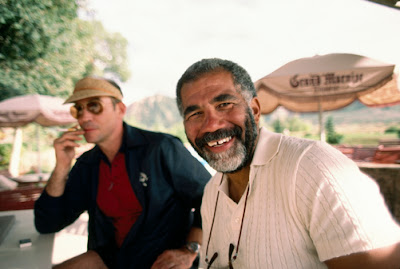 Who are the bulldogs of journalism now? Here is what Bradley wrote after the death of H.S. Thompson:

Hunter's been a friend for 30 years. I met him in 1975, during the presidential campaign. During the campaign we talked almost -- well, he was on the road then much more than in recent years, but we talked almost every day. Even when he wasn't on the road with the campaign, we'd check in with each other at night or in the morning, usually late at night more than in the morning. And we'd talk politics, and life.

We talked to him a couple of weeks ago, and I saw him at Christmas. I moved to Woody Creek because of Hunter. He invited me in 1976 to come out to Aspen for a weekend. I fell in love with the valley and ended up buying a condominium in town. And then got tired of the bustle of town and bought a house on a quiet dead-end road in Woody Creek. Hunter and I were neighbors.

Bradley was the first black journalist to do everything.  He lived long enough to see the results of the recent election.  I'd like to say it put him over the edge.  It might have.  Thompson and Bradley were my kind of liberals, the kind that don't seem to exist any longer.  They had keen eyes and bad habits.  They cared for the disenfranchised and opposed greed.

Yesterday, Ili and I took the scooter to lunch at a distant place where we could get lamb and garbanzo beans and lentils in various forms.  Then we decided to take a cruise, eventually, I thought, ending up at an Asian grocery store that sells young coconuts at half the price of Whole Foods.  But way led to way and we ended up in a traffic nightmare downtown in the big city.  We couldn't turn, couldn't get out of the traffic as the roads were blocked by barricades and policemen.  There was going to be a parade.

It is not easy to keep balance on a Vespa with someone on the back as you stop and go, stop and go.  I was getting frustrated.  Finally, though, we came to a street where we could turn.  But so could everyone else.  As I made a slow, wobbly left, a car cut across two lanes and pulled in front of me.

"You cut me off you motherfucker," I yelled.  It is my natural way.  The fellow in the expensive Benz stuck his arm out the window and waved me by.  I realized, of course, that I was going nowhere and would have to live with him in the crawling traffic for quite awhile. He pulled the car up beside us, and I thought, "O.K. Here we go."

But he was smiling.

He was one of "those" guys, a sports fan, a Trump supporter, a boy-o.  You know, one of the masculine tropes that feminists hate.

"If I was on my Harley, I'd cut through all of this.  But wait until you see some of the outfits!"

He handed his phone out the window to Ili shaking his head amused and sad.  We were buddies now.  We were friends.

The traffic moved a few inches and I pulled ahead.  I could feel Ili laughing behind me.  "Funny guy," she said.  "I think he's drunk."

The bus went by in the bus lane, and our new buddy pulled up beside me again.

"Even the buses are gay in this town," he said.  The bus was pink.

Somehow we started talking about the election.  He was very happy.

"What the fuck?  So the guy can't speak in public.  If I were a billionaire, I wouldn't let people tell me what to say, either.  He's not like this other guy we got letting the kids run around yelling and screaming.  They ought to put 'em in jail like they did when we were kids, right?  You'd get thrown in jail for throwing a rock."

"Not for throwing a rock, maybe."

I couldn't help buy like the guy.  He was open and friendly and cocksure and he didn't hold it against me that I called him a motherfucker.

Finally the traffic began to move a bit, and when we got to a cross street, he gunned it and took a right.

We finally got out of the traffic, and I headed around the backside of the parade barricades to see what was going on.  There were lots of people wearing pride outfits and carrying homemade placards.  There were t-shirts and rainbow colored wigs.  That's our town.  We get the run-of-the-mill stuff.  This ain't San Francisco with butt chaps and Village People costumes.  Weren't nobody naked.  No big weiners or boobies.  Just a bunch of boring people being pretend crazy.

Back on our side of the county, in our little hometown, things were quiet.  We stopped at a little hipster market and got some watermelon juice, and then we headed home.

"We have fun on the Vespa, don't we?" Ili queried.